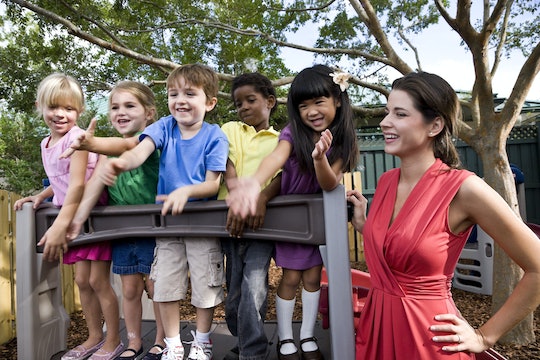 Eight thousand Starbucks stores closed on May 29 for "racial bias" training, often referred to as "diversity awareness" training, after two black men were arrested in April for simply waiting in a Philadelphia Starbucks for a friend to arrive (Starbucks issued an apology following the incident). At this point, you wonder if all of America could do with a primer on diversity and inclusiveness, as has become the norm in workplaces across the country. Beyond that, tolerance and respect are being explicitly taught to children — lessons I started with my children before they went to school.

Growing up in Los Angeles, California, I was lucky to have a diverse group of friends. I learned to respect their different religions, cultural traditions, and political views. Teaching my girls to embrace differences in others has been a responsibility that I take very seriously.

And if you think babies are born free of racist tendencies, you would be wrong. A study published in Developmental Science found that infants associated happy music with faces of own-race people, and sad music with faces of other races. Infants also preferred to look at faces from their own race, as found in a study published in Current Directions in Psychological Science.

But how do I teach my children to be accepting of others? To find out, I spoke to a diversity awareness instructor.

Chad Nico Hiu serves as director of diversity and inclusion at the YMCA, and says it’s never too early to start nurturing those concepts.

“In order to foster true inclusion, we must begin with a genuine and unwavering belief that all people deserve to be treated equally and have the opportunity to reach their fullest potential with dignity,” Hiu tells Romper.

As a mom, there have been many instances when I said something that I wish I could take back the second the words left my mouth.

He says that it's most important to encourage your kids to be curious about other cultures and communities, and to model that approach to life.

“Much of what children and adults remember about diversity comes more from interactions and experiences, [more] than from presentations, handouts or even YouTube videos,” Hiu says. “In classroom and co-curricular settings, consistent reinforcement that differences and diversity make us stronger and are to be celebrated, not feared are crucial.”

Hence the need for representation and for guidance around navigating our own feelings of difference. Hiu's remark also echoes the finding by the Harvard Business Review that diversity programs often "fail" because they are prescriptive, and employees don't feel ownership over the initiatives — rather, they rebel against the directive to hire minorities or sit through training seminars (sound like kids, much?).

They found, however, that you could get positive results by doing three things: "engage managers in solving the problem, expose them to people from different groups, and encourage social accountability for change." These are concepts that you could of course apply to kids, who love to be given responsibility over decisions, and to be involved in conversations.

“Youth today are often hyper-observant of all adults around them, from parents/guardians to adults they come into contact with in any area of their daily lives,” says Hiu.

Practicing what we preach can be difficult at times. As a mom, there have been many instances when I said something that I wish I could take back the second the words left my mouth. My daughters listen to everything! They are coy in that way as they stare out the car window or play on their Kindles as me and my husband talk during car rides. That’s where I slip up, discussing politics in terms of “us” versus “them," or tossing off an insensitive comment. And I’m always shocked when my daughter will cut in mid-conversation with a follow-up question to a statement she was not meant to hear. “Why does [insert country] food taste gross, Mom? I don’t think I like it either.” Mom fail.

Aside from my personal slip-ups, I also worry about the effect others have on my children. I’m not with my children all day since they attend preschool and kindergarten five days a week, and although their teachers have been wonderful about teaching them to be inclusive and treat others with respect, it's strangers that worry me. An adult who stares at a child with a disability while in line at the market or a mom who frowns at a little boy wearing a dress and nail polish in Target. Those are the actions that concern me because kids notice everything — and I just hope I’m handling them the right way.

Hiu says the way we react in these situations is crucial to imparting inclusiveness to our kids.

“Reflect on your inclusiveness and what your children are seeing, especially when you are in spaces or communities where you are unfamiliar,” he says.

You can be inclusive even if you don’t agree with a person’s viewpoint or belief.

He recommends taking children to cultural celebrations, community activities and restaurants that are outside the norms of what your family may be used to. Making a deliberate effort to create relationships with people who may come from a different background is a good way to chip away at a kid's ideas about who they relate to. If your social circle is homogenous, you might have to put in a bit of work to expand it. You can also use the many brilliant children's books out there to broaden their exposure to the world.

A key point to remember when teaching diversity is that you can be inclusive even if you don’t agree with a person’s viewpoint or belief. The goal is to find empathy and compassion for others, and aim to respect your differences.

Attending Special Olympics events, discussing different cultures and religions, and explaining why some boys marry boys, why some women wear head scarves, and why some classmates do not participate in Christmas-themed activities are things we’ve done and will continue to do.

But I understand that to teach and instill these core beliefs of respecting others is to put it into practice in my daily life, which means I need to lead by example. That means acknowledging that sometimes I can be insensitive, that sometimes even moms and dads get it wrong, and, rather than pretending that there aren't differences, acknowledging and accepting people with various identities.

In Los Angeles, my girls have friends of various races and have never asked why someone's skin is darker or lighter, or why some of the mom's who drop off their children at school wear a hijab. They love Ellen DeGeneres and her wife Portia DeRossi, and understand that some of their friends do not eat meat due to religious beliefs.

They're well on the way. I think the bulk of the work now sits with me and my fussy palate: tonight, I might try to eat that cuisine I said I hated, and see if its the food, or just me.