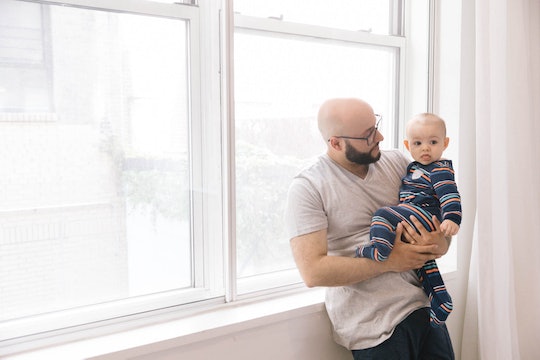 How To Tell If Your Baby Can Hear, According To Experts

There are so many benchmarks and milestones to look for when you have a baby. There’s holding their head up, smiling, sitting without support, crawling, and walking, among many others. One of the biggest milestones parents look forward to is babbling and talking. Hearing affects those two milestones though, and you may be wondering how to tell if your baby can hear, especially if they aren’t reacting to sounds as an infant, or beginning to babble at about 4 months old.

Dr. Eboni Hollier, a pediatrician in Houston, Texas, tells Romper that hearing loss is one of the most common birth defects, but some children don’t lose their hearing until they’re older. Your baby can even respond and react to sounds while they’re in the womb. “By birth, a baby prefers their parents’ voices, as well as the stories read and the music heard before birth,” Hollier says.

If you give birth in a hospital, before you leave, the staff performs hearing tests for your baby. One is an Otoacoustic Emissions (OAEs) test and the other is an Auditory Brainstem Response (ABR) test. This early testing is important, because according to Hollier, “The more severe the hearing problem is, the earlier it may be detected, while those with milder hearing loss or hearing loss on one side may not be detected until years later."

How do these tests work? According to the American Speech-Language-Hearing Association (ASLHA), during the OAEs test, a small earphone and microphone are placed in the ear, and sounds are played. Your baby’s responses are measured, and if your baby has normal hearing, a vibration “produces a nearly inaudible sound that echoes back into the middle ear.” If there is hearing loss, there’s no soft sound. The ABR test involves “pasting electrodes on the head — similar to electrodes placed around the heart when an electrocardiogram is run — and recording brain wave activity in response to sound,” according to the ASLHA. “The person being tested rests quietly or sleeps while the test is performed. No response is necessary.”

Once your baby is home, how can you check for signs of hearing loss? South Florida audiologist and owner and director of Brainchild Institute, Dr. Leah Light, tells Romper that you'll want to watch your newborn for signs of showing responses to sounds, whether it’s their eyes widening, increased or decreased sucking, or eye shifting. If there’s an issue, your baby will startle to a loud sound. “We know the baby hears, but they could still have a mild or moderate hearing loss,” Light says in an email interview.

What milestones should you be looking for in your infant as far as hearing goes? Pediatrician Preeti Puranik says newborns alert to sounds at about 1 month old. By 3 or 4 months, the baby will turn their head toward sounds, and by 10 months, the baby should look directly at the source of the sound. “These are some of the behavior patterns that a pediatrician looks for when a baby visits for a regular check up, especially during vaccination visits,” Puranik says. Hollier adds that babies should also have “more complicated babbling” by 7 months old, show a specific response to their name at 9 months old, and use first words other than mama or dada by 11 months.

Light says it’s very important to have babies diagnosed with hearing problems before 6 months of age in order for them to have the best outcome, as it’s a “sensitive time period.” Hollier agrees and says no baby is too young to have their hearing formally evaluated. “If hearing loss goes undetected, your child is at risk for developing speech and language deficits, cognitive and social skills challenges, as well as later academic difficulties, including learning to read,” Hollier says.

Thankfully, most hospitals offer the OAEs and ABR tests without you having to ask, but if they don’t, be sure to talk to someone. Catching hearing loss in your baby early gives them the best chance to have successful language and social skills down the road because you’ll able to get them devices to help with their hearing sooner rather than later. Even after the tests are done at the hospital, stay on top of certain sound recognition and vocal milestones. Every child is different, but if you feel like they aren’t hitting the mark quite right, it’s always best to ask your pediatrician.

More Like This
Is It Good For Babies To Be Exposed To Germs? It’s Complicated
When It’s Safe To Bring Your Newborn To A Restaurant, According To A Pediatrician
Can You Burp A Baby Too Hard? A Pediatrician Shares Tips For Gassy Tummies
Can You Give A Sleeping Baby A Breathing Treatment? Experts Explain