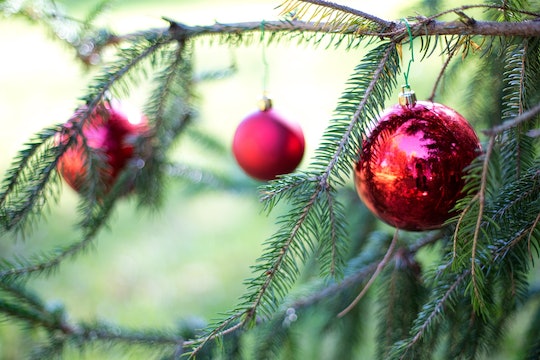 Here's How To Tell If Your Baby Is Allergic To Christmas Trees, According To A Pediatrician

The smell of a Christmas tree is my favorite thing about the holidays these days. I think it’s because I never had a real Christmas tree growing up since my mom was allergic, but my family improvised and tied pine-scented car air fresheners to the inner pole of the tree to get those smells. What can I say, us Berwagers knew how to improvise. But if you have a new baby and want to get a real tree (and not use air fresheners), you may be wondering how to tell if your baby is allergic to Christmas trees before you go and chop one down and bring it into your home. Because nothing puts a damper on the holiday spirit as much as an itchy, sneezy, crying, sniffling baby.

Pediatrician Dr. Jarret Patton tells Romper that because Christmas trees are basically nature’s air filter, it's normal for babies to have a reaction. “As air moves through the trees it can trap dust and pollen. If your child is prone to seasonal allergies, there may be a mild flare up when you bring the tree home,” Patton explains. "Although it would be rare for allergies to present in a young infant, sneezing, watery eyes and nasal congestion could be symptoms of mild allergies. In a more severe case, hives could be present. In either case, oral antihistamines could be used as prescribed by your physician."

The website for How Stuff Works agreed and noted that allergies, also known as “hay fever,” don't affect infants as much because, “the way that allergies work is that once your body is exposed to an allergen and registers it as dangerous, it will continue to have the same response thereafter. Babies don't usually get enough exposure to trigger their immune systems. Most commonly, children don't start suffering from hay fever until they're 7 years old, and hay fever in babies under 2 is considered uncommon.” It’s important however, the website noted, that you make sure you rule out whether the symptoms could be a sign of something else.

As far as having an allergy to the tree itself, as you are picking it out, Patton suggests, “Let your child touch the needles or the tree sap from the bottom of the trunk to determine if they have allergies to the tree itself. If your child brushes against the tree and gets scratched by the needle, you may see a contact allergy pretty quickly. This is minor as long as the child doesn't continuously touch the tree."

If your child does have a contact allergy with the sap or needles of the tree, Patton suggests treating your infant by using an antihistamine liquid by mouth or cream on the rash. As far as the seasonal allergy signs, The American Academy of Pediatrics noted there are liquid forms and pill forms of antihistamines your child can take to help with the symptoms, however, nasal steroids is what they recommend. You have to get a prescription from your pediatrician for those, however.

So as far as babies go, you don’t have to worry too much whether or not they’re allergic to Christmas trees as their immune systems haven’t had enough exposure yet. But if your child is 7 or older, you may be noticing some signs and symptoms of allergies either to the tree itself or its sap and needles. Thankfully there are plenty of options for treating seasonal allergies out there, but as usual, be sure to contact your pediatrician to make sure what you’re choosing is safe for your child in particular.