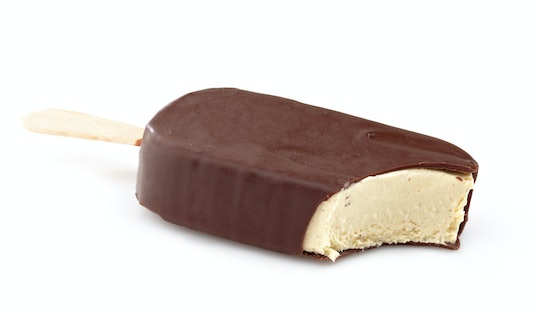 Check Your Freezer, Because A Bunch Of Ice Cream Bars Were Recalled Due To Listeria

Nobody wants to be enjoying a delicious ice cream bar, only to find out it has been recalled. Especially if that ice cream bar has been recalled due to a potential Listeria contamination. As a number of stores are pulling a variety of cold sweets from their freezers, here's how to tell if your ice cream bars were recalled so you can get them out of your own home as soon as possible.

Fieldbrook Foods, an ice cream manufacturer based in New York and New Jersey, recently announced a voluntary recall of its 26 brands of chocolate-coated vanilla and orange-flavored ice cream bars due to a potential Listeria contamination. Romper has reached out to Fieldbrook Foods for further comment regarding the recall and is awaiting a response. The company sells its products to major food retailers like Safeway, Kroger, Aldi's, B.J.'s, Giant, Meijer, Price Chopper, and Shaw’s.

The Food and Drug Administration announced that there have been no reported illnesses from the potentially contaminated ice cream bars, but that one of the company's three production lines (Hoyer 1 Line at its Dunkirk, New York plant, code 362677) was considered a possible concern for Listeria. The recall only involves products from this particular plant, which were manufactured and shipped out in 2017. To find out whether or not you might have these ice cream bars in your freezer, the FDA notes:

Below is a list of affected brands, so if any of them match products in your freezer with the "best by" dates above, you'll want to either toss them immediately or bring them back to the store where it was purchased for a full refund.

The Centers for Disease Control and Prevention notes that Listeria monocytogenes, the bacterial infection that could have contaminated the ice cream bars made by Fieldbrook Foods, can cause some fairly serious gastrointestinal issues. Especially in people with weakened immune systems, pregnant women and older people who have eaten food contaminate with Listeriosis. People who are suffering from Listeriosis will often present symptoms like:

These symptoms can sometimes take awhile to present themselves; as the CDC reports, some people have reported symptoms as late as 70 days after eating food contaminated with Listeria.

In the case of the ice recalled cream bars from Fieldbrook Foods, the possibility of contamination was discovered after routine testing of only a few of the novelty treats, according to the FDA. The expanded recall was reportedly a result of precautionary measures and concern for consumer safety, particularly when a few more ice cream bars also tested positive for Listeria. In keeping with the company's attempt to be as cautious about its customer's safety as possible, the FDA noted that no product tested positive for contamination before Oct. 31, 2017, but the company chose to recall products made from Jan. 1, 2017 on through an "abundance of caution." Fieldbrook Foods sent out a press release to that effect:

Fieldbrook Foods Corporation takes the safety and integrity of our products very seriously. Our families also consume these products and we are working tirelessly to identify the cause of the problem and permanently fix it so the orange cream and other types of ice cream bars made at Fieldbrook Foods will again have the complete confidence of our customers and consumers.

If you discover that you have purchased some of the recalled, primarily store brand, ice cream bars (chocolate-coated vanilla, orange, or one of those flavors in a variety pack), bring them back to the place of purchase for a full refund. Consumers with questions may contact the company at 1-800-333-0805 ext. 2270.

Make sure to have a look in your freezer, because the last thing any parent wants is for their child to eat an ice cream bar potentially contaminated with Listeria.

More Like This
The FDA Is Worried People Are Cooking Chicken In NyQuil
Snooki Hints That A Sunday Dinner With All The Jersey Shore Kids Is In The Works
Molly Yeh Draws The Line At Hot Pockets
Eden Grinshpan On Getting Your Kids To Love Fish Eyeballs (Yes, Really!)