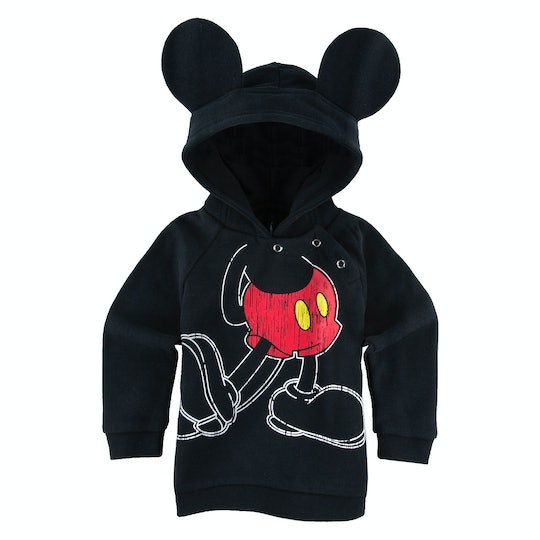 Was Your Baby's Disney Hoodie Recalled?

If you've purchased an infant-sized, mouse-inspired Disney hoodie recently, either from a Disney resort or from their online app, it's possible that you'll need to return it. Due to the fact that "the snaps on the hoodies can detach, posing a choking hazard to young children," Disney has recalled two of its Mickey and Minnie Mouse themed sweatshirts. Here's how to tell if your infant's Mickey Mouse hoodie was included in Disney's recall, because you definitely don't want to endanger your child. (Romper has reached out to Disney for comment about the recall but has not heard back.)

In its provided statement on the company's website, Disney's safety recall asks that consumers who've purchased the product "immediately remove the Infant Hoodie Sweatshirt from child and return for a $40.00 refund." These particular two items were reportedly sold for $29.95 at the Walt Disney World Resort in Lake Buena Vista, Florida; Disneyland Resort in Anaheim, California; and through the Shop Disney Parks app. Disney asks that guests seeking a refund contact the company from 9 a.m. to 5:30 p.m. ET, Monday through Friday, at 1-844-722-1444 and select Option 2. According to the United States Consumer Product Safety Commission, about 15,000 of the hoodies exist and need to be returned. The sweatshirts were manufactured in China and are made from a cotton and polyester blend.

Photos of the two hoodies are shown below. Though different in design from each other (one is undoubtably a "Minnie" iteration that's complete with a polka dotted bow and matching print of her signature dress and the other offers a "Mickey" print on its front), the images show that both hoodies have the three potentially hazardous snaps on the wearer's left-hand side. Luckily, though, no incidents or injuries have been reported yet.

Disney's website also notes that two of its other products for infants — its Darth Vader infant bodysuit and its Disneyland 60th infant bodysuit — have been recalled due to hazardous snaps as well. The company is offering a refund for these products, which guests can obtain by calling the same number shared above.