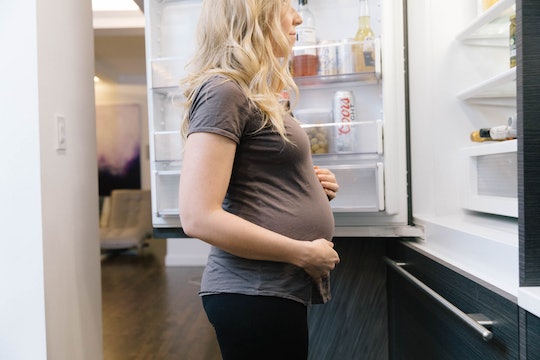 How To Tell If You’re Dehydrated During Pregnancy

It's hard enough to keep track of your water intake as a normal human being, but when you're pregnant, it's vital. Your body uses water in many ways during pregnancy, and so having enough of it becomes even more necessary. You know you need to drink a lot, but how much is enough? Knowing how to tell if you're dehydrated during pregnancy can clue you into your body and if you're supplying it with enough fluids.

The easiest way to tell whether your body needs more water is to take a look at the color of your urine. According to the American Pregnancy Association (APA), if your urine is dark yellow, that's a sure sign that you need to increase your water intake. Having a clear urine color is a sign of being well hydrated.

If you feel like you're not urinating enough, that could be another sign of dehydration, especially since when you're pregnant, you're used to hitting up that bathroom as often as possible. As Glamour noted, not much urine can come out if not enough water is going in.

Another common sign of dehydration during pregnancy is something called "maternal overheating." According to the APA, having enough water in your system helps to regulate your body heat. If you're not drinking enough water, especially when pregnant, you can be more likely to feel overheated.

If you go in to see your doctor, one of the ways they may check you for dehydration is to take your blood pressure. According to the Mayo Clinic, you're more likely to have low blood pressure when you're dehydrated. You may even find a noticeable difference in your heart rate when you sit up from a lying down position. This is the root of why you feel light-headed or faint when not drinking enough water. (And you thought those dizzy spells were just from being pregnant.)

As far as how much water you should be drinking, it really depends on your health and your body. The Mayo Clinic noted that the average pregnant woman should be drinking about 2.3 liters a day, and that most beverages count towards that daily total. Limiting your caffeine intake can also help, since caffeinated beverages tend to have a dehydrating effect.

If you're really concerned about exactly how much water you should be drinking, talk to your doctor. If you're feeling light-headed or faint, or becoming overheated, you should seek medical attention. Generally speaking, whether you're pregnant or not, it wouldn't hurt to add more water to your daily routine.