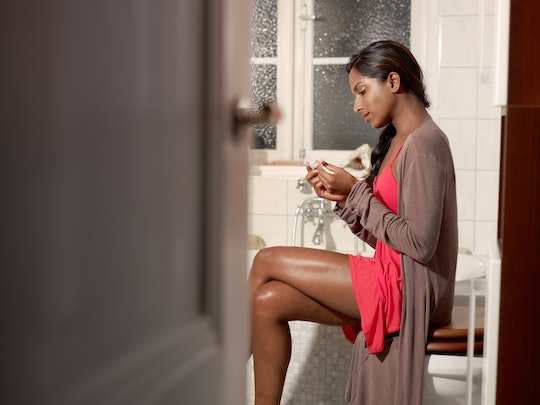 Watch any movie or television show where a character finds out she’s pregnant and you’ll probably notice a few things. One, she most likely had her head in the toilet when the realization hit. Two, she probably did some quick backtracking in her mind’s calendar to remember when she last had her period. And three, she quickly ran out to the nearest gas station, took a pregnancy test, and saw two pink lines. But that experience isn’t for everyone, and whether you’re trying to conceive or not, knowing how to tell you’re pregnant can make things a lot simpler.

When my ex-husband and I were trying to get pregnant, I nearly drove myself crazy wondering if every twinge or ache I felt was a pregnancy symptom. It seems like the easiest way to know if you’re pregnant would be to take a pregnancy test, but, as the American Pregnancy Association notes, tests aren’t accurate up to 14 days after conception. That’s a long time to wait when your boobs hurt and you can’t handle the taste of cantaloupe anymore. Pregnancy tests detect if there is any of the pregnancy hormone (hCG) in your system, but because hCG is released the minute an egg is fertilized, it’s possible to feel symptoms before you see that positive test. It’s important to note that many pregnancy symptoms are similar to symptoms of PMS, so nothing is set in stone without a positive pregnancy test and a confirmation from the doctor. But if you’ve been trying to conceive for a long time, these signs of pregnancy good mean good news is on the way.