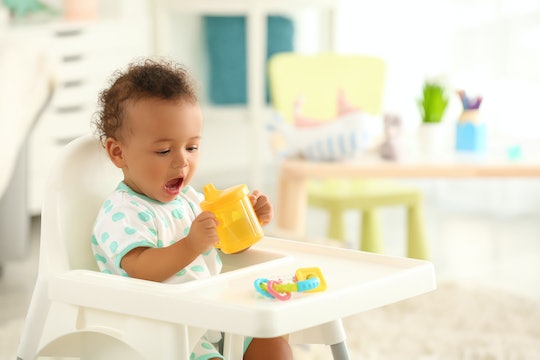 If Your Baby's Ready For The Sippy Cup, Here's How To Make The Transition

If you’re a bottle-feeding mama — whether it’s sometimes or exclusively — you may wondering how soon you can wean your baby from a bottle to a cup. (Because honestly, those nighttime feedings and routines seem to be getting longer and longer.) But figuring out how to transition your baby from a bottle to a cup takes some thinking, too. Is a sippy cup as natural of a reflex as sucking on a bottle nipple or a breast? How can you make this transition as seamless as possible?

Dr. Gina Posner, a pediatrician at MemorialCare Orange Coast Medical Center in Fountain Valley, California, recommends introducing a sippy cup at around 5 or 6 months. “By between 12 and 15 months, I recommend switching everything to only a sippy cup (including milk),” Posner tells Romper. You’ll want your baby off the bottle no later than 18 months, according to Posner. The American Academy of Pediatrics (APA) agreed and noted, “Otherwise, prolonged bottle use can cause tooth decay and may encourage your child to drink much more milk than he needs.” The APA added by the time your baby turns 1, their body should no longer require anything to eat or drink at night, “although he may briefly, and loudly, disagree.” The APA suggested you discuss this with your pediatrician, however, because every child and his or her needs are different.

What are the best types of cups to give to your toddler? Posner says it depends on what they’ll use. “Some kids like straw sippy cups. Others like the ones with a spout. There are also newer ones that are designed like a regular cup, but they have a top that allows them to drink from it, but not spill,” she suggests.

According to Baby Center, you should start off with a sippy cup that’s soft and pliable, because that will feel much more familiar to your baby’s mouth than a hard spout. “Show your baby how to raise the cup to [their] mouth and tip it up to drink,” Baby Center suggested. You can show your baby that the spout is like a nipple “by touching the tip of the spout to the roof of [their] mouth to stimulate the sucking reflex.”

If your baby just won’t take to a sippy cup, don't panic. Baby Center noted that some children go straight from breast or bottle to a regular cup anyway. You should also be patient until your baby masters the technique. It may be worth it to test drive a few sippy cups to see which one works and which one your baby likes the best, too.

As far as what types of liquids you should introduce, Posner says you should introduce water between 5 and 7 months, and she never recommends juice to parents because she believes it’s bad for them. A Food & Wine article reported that the APA changed their policy recently this year to no juice for babies, unless it’s prune juice or another type of juice prescribed by their pediatrician to help with constipation. Previously, the APA noted kids as young as 6 months could have juice, but Dr. Steven A. Abrahams, who co-authored the new statement said concerns about cavities and the rising obesity rates in children led them to make the change. He added there were no benefits to juice at that age and that this change “wasn’t based on 'some magical new science,' but the recommended guidelines for juice just hadn’t been looked at for a really long time."

So it looks like the time for the bottle will probably come to an end once your child is between 12 and 15 months with your baby solely using a cup by 18 months. Every kid and situation is different, though, so be sure to talk to your pediatrician about your child’s transition and get their recommendations on what is best for your child and his or her health.

More Like This
Here’s What You Need To Know About That Viral 1960s Baby Formula “Recipe”
The Best Apps For Selling Used Baby Gear
Abbot's Formula-Producing Plant Can Reopen In As Early As 2 Weeks — Now What?
24 Beautiful Baby Names With The Same Vibe As Mila