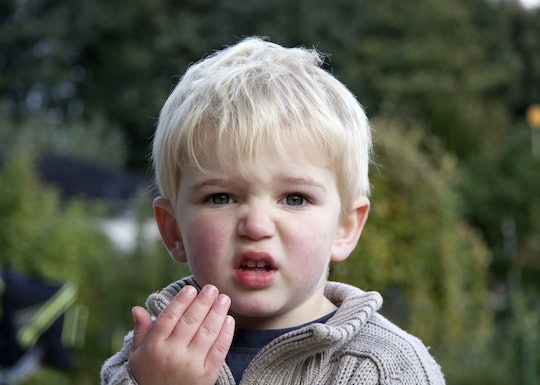 How To Treat Your Toddler's Seasonal Allergies, Because They Are *Miserable* & So Are You

Snot, sneezing, coughing, it all comes with allergy season. But what happens when it hits your toddler with all the force of a maple tree? Colds run their course in a matter of days, but seasonal allergies can hang on quite a lot longer and sometimes even return as the seasons change. Toddlers aren't exactly the best patients, so you'll definitely want to take note of how to treat seasonal allergies in toddlers and help them be as comfortable as possible.

If your toddler is coughing, sneezing, or generally congested as the seasons change or even throughout the springtime months, it could be a sign that he's suffering from seasonal allergies and needs antihistamines, decongestants, or just to eliminate as many of the allergens as possible. KidsHealth explained that seasonal allergies happen when "outdoor molds release their spores, and trees, grasses, and weeds release tiny pollen particles into the air to fertilize other plants." If your kid's symptoms coincide with a layer of yellow pollen covering your car, seasonal allergies are usually the culprit.

The first place to start with toddler seasonal allergies is to eliminate exposure to allergens where possible. KidsHealth recommended keeping the windows closed, using air conditioning where possible, and staying indoors when allergen counts are highest. "It's also a good idea for kids with seasonal allergies to wash their hands or shower and change clothing after playing outside," they said.

But it's difficult to totally eliminate allergens, especially when kids have to leave the house at some point, whether for school or daycare or simply to keep you from losing your marbles! If your toddler has a runny or stuffy nose, you can give them a dose of an antihistamine like Benadryl. WebMd suggested said, "Antihistamines are usually the first medications used to treat allergies," because they block histamines, the chemical that's released when your toddler has an allergic reaction. You can get some antihistamines over the counter, but your doctor can offer prescription strength versions as well.

Antihistamines are often paired with decongestants, which don't fight the histamines but can help clear up stuffy or runny noses. Dr. Sears explained that there are a few potential but rare side effects from decongestants and antihistamines, including drowsiness or hyperactivity in kids. The pediatrician also recommended "flushing the nose two or three times a day with nasal saline spray and gently [blowing] the nose," which can relieve allergy symptoms without the need for allergy medication at all.

The key to managing allergies in toddlers and adults alike is to try to catch them before symptoms start. That's easier said than done when you can't yet predict when your kid is going to start showing symptoms. However, if you notice that your toddler is oftentimes suffering from allergy symptoms in the early morning hours, giving them a dose of antihistamine or decongestant before they go to bed at night can help keep those symptoms from developing and waking up the whole house, explained WebMd. Likewise, if your toddler starts to have routine and predictable allergy symptoms, giving her a daily dose of allergy medication 3 to 10 days ahead of a flare-up can help keep the symptoms to a minimum when they do occur, explained WebMd. As with all medication, you should check with your doctor before giving your toddler medicine.

If you're in the thick of allergy season with a snotty toddler and you can't shut yourselves inside for the foreseeable future, try Kid Health's tip and do your best to keep pollen off of them and out of the house by making sure that they wash their hands and change their clothes when they come in from the outdoors. And when you're washing your little one's clothes, Baby Center recommended, "Dry her clothes in the dryer rather than on the clothesline, and close the air ducts to her bedroom." This can also help cut down on symptoms before they start.