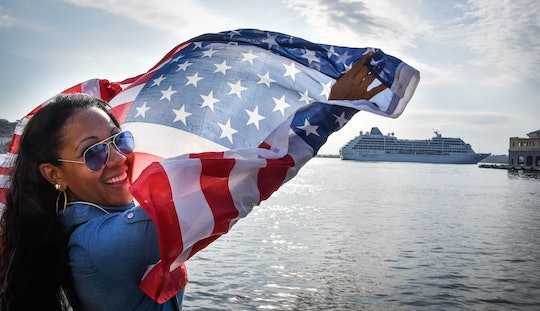 Independence Day is fast-approaching, and it's time to break out those American flags. When I was a kid, I remember my dad bringing ours out from where we normally stored it in the lead-up to the holiday and hanging it carefully from our front porch, generating lots of excitement for me and my little brother. The holiday is a great opportunity to teach your children about the importance of the American flag, but make sure to follow the rules of proper American flag etiquette while doing so — because it's important that both you and the little ones know how to treat the American flag with respect.

There's a long list of rules of how and how not to handle our nation's symbol of patriotism and unity, all codified as part of a "Flag Code" passed by Congress back in 1942. Turns out you don't have to do anything nearly as egregious as burning the flag to violate its sanctity. Some of the flag regulations probably won't apply to you if you're simply hoping to display it at your house or apartment, unless for some reason you also really want to display the United Nations flag, and need to know if you can raise it higher than the American flag. (You can't, by the way, unless you're at the UN headquarters.)

You can find a full list of the regulations at The Old Farmer's Almanac, but here are a few of the most relevant ones:

As you're displaying the flag, go ahead and get your kids involved! You can use the Fourth of July as an opportunity to teach them about America's history, and how the flag represents the country. (Quick refresher: the 50 stars represent the 50 states, while the stripes represent the original 13 colonies that declared their independence from England.) They might enjoy the ceremony of hanging the flag, and might particularly like being the person who gets to receive it so that it doesn't touch the ground.

All in all, the respect you show the flag as you handle it will likely have an effect on your child, impressing upon them the importance of the Fourth of July as more than just a day to look at some cool fireworks.