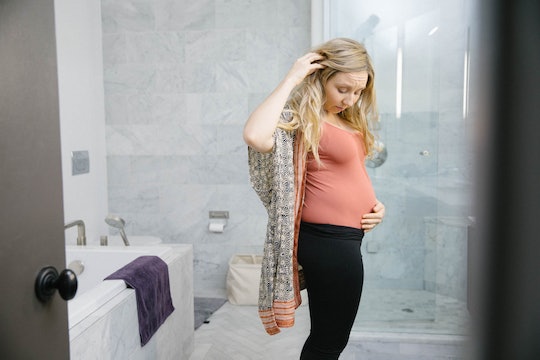 How To Use Black Cohosh To Induce Labor, According To Experts

The last trimester can seem like an eternity and it’s understandable that a lot of women get to a certain point where they’re willing to do almost anything to speed things along a bit, including inducing labor at home. There are many old wives' tales and tips and tricks that have been spread around about naturally inducing labor, including using black cohosh. I know — it sounds like something from Harry Potter — so knowing how to use black cohosh to induce labor seems essential. But is using black cohosh safe, especially if you’re not being supervised by a professional? What are the risks?

More Like This
Could Increased Anxiety Mean You'll Go Into Labor Soon? Experts Explain
Let’s Bust All The Myths About The COVID Vaccine & Fertility
Your Guide To Hiking During Pregnancy
Lightning Crotch Can Actually Tell You These 7 Things About Your Pregnancy

Kristen Burris, L.Ac, a women’s health acupuncturist and infertility specialist, tells Romper that in her opinion, using black cohosh to induce labor isn’t safe. “It is never safe to use herbal medicine to induce labor unless under the specific guidance of a trained and licensed herbalist,” Burris says. “This herb is not effective in inducing most labors because herbal medicine doesn’t work across the board for every person; it must be individualized based off of medical patterns, not generalized health conditions. It is critical to assess the patient’s individual pattern and what the appropriate treatment plan is per the individual,” she explains. “An herb that traditionally raises energy upward and clears heat is not appropriate for the pregnant woman who has stabbing labor pains in her back with blood stasis.”

According to Evidence Based Birth, there have actually been more studies about blue cohosh, rather than black cohosh, and that blue cohosh was used by Native Americans to treat gynecological problems and induce labor and decrease labor pains. Black cohosh comes from the same plant class as blue cohosh, but it’s often used in combination with the blue cohosh when being used by pregnant ladies.

One specific study showed that a woman who “consumed several doses of black cohosh with the intent to induce and augment labor,” ended up experiencing severely low levels of sodium in her blood, a condition called “hyponatremia.” Another case Evidence Based Birth described is one about a 24-year-old first-time mother. She actually drank the blue cohosh in tea form, and ended up having a C-section because her baby had a stroke. However, “the dosage and preparation of her blue cohosh are unknown,” noted Evidence Based Birth.

“When [doctors] tried to figure out the cause of the stroke, they found that both the baby’s urine and meconium were positive for a cocaine metabolite, so they tested the contents of the mother’s bottle of blue cohosh and the contents of a sealed bottle of a different preparation of the herb, and the tests found the same results,” Evidence Based Birth explained about the study. “In correspondence in this journal, the authors clarified that blue cohosh is not known to contain this metabolite of cocaine, and they think that the most likely explanation is maybe that there was some cross-reaction that confused the test results, or that the test data were interpreted incorrectly.”

Another woman was reported taking three times the recommended dosage level and her baby had a heart attack after it was delivered vaginally at 41 weeks, according to the Journal of Pediatrics. “She took three tablets a day for three weeks. The quantity of blue cohosh in the tablets that she took is unknown. The baby was critically ill for several weeks before recovering enough to go home. The child was still receiving therapy for heart failure at 2 years of age. The authors claimed that they ruled out any other possible causes of the heart attack, so they do believe that the heart attack was due to the herb," the article noted.

Yale grad student Aviva Romm published an article titled, “Blue Cohosh: History, Science, Safety, and Midwife Prescribing of a Potentially Fetotoxic Herb," in 2009, and her results from her research weren’t very reassuring either. “What is clear from this study is that blue cohosh has a very long history of use as an herb to prevent and ease the difficulties of childbearing women, and for a variety of philosophical, practical, ideologic[al], political, and medico-legal reasons, its use remains prevalent,” she wrote. “While the constituents in this herb are consistent with some of the observed side effects, and even possible players in one significant adverse event report, the number of plausible reports is very low. However, as with many drugs, it can take tens of thousands of observed/documented administrations to identify even a single causal relationship between a substance and an effect; the numbers of systematically observed uses is too low to quantify whether there are a significant number of adverse events related to use of this herb, if any.”

Romm continued, “While it appears that the risks associated with short term use, for example, for labor induction and augmentation may actually be quite low, and the risk may be mitigated further by using the herb only in tincture form, the preparation with the lowest quantity of the alkaloids and saponins responsible for its pharmacologic actions, at this time, until further research is done, the herb should be used only under the supervision of a qualified obstetric health professional, with proper monitoring, if at all.”

Unless you’re being monitored by a medical professional or a certified herbalist, the risks that seem to emerge from using black cohosh to induce labor, from what researchers have seen, don’t seem worth it. If you do still want to try this induction method, please contact your healthcare provider or a certified herbalist so they can do a full workup of your health profile and medical history to ensure that you’re getting the right dosage and correct combination with other herbs before trying this at home.