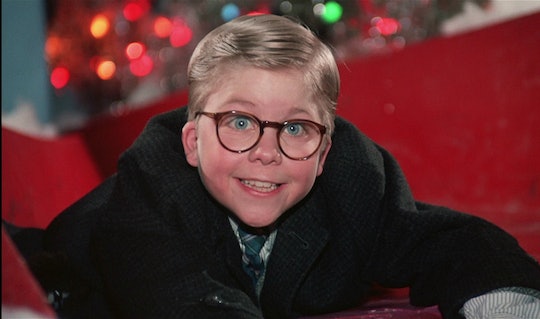 Don't Miss Out On Watching 'A Christmas Story' This Holiday Season

Almost everyone can relate to knowing exactly what they wanted for Christmas and doing everything in the power to make sure they got it. That's probably why Ralphie Parker's adventures in A Christmas Story remains one of the most popular holiday movies of all time, over 30 years after it was first released. But in order to relive Ralphie's determination to get his Red Ryder BB gun, you may want to know how to watch A Christmas Story this holiday season.

Although you won't find A Christmas Story playing on your TV just yet (it's tragically missing from Freeform's 25 Days of Christmas schedule), you'll probably be able to watch the film any time you want come Christmas Eve. Every year TBS shows A Christmas Story on repeat beginning on Christmas Eve and lasting through Christmas Day. So no matter what time you finally have a chance to sit down and watch the hour and half-long comedy, it'll always be playing.

If you don't want to wait until then to relive the fun, you can also purchase the DVD for $7.88 or the Blu-ray for $7.99 from Amazon. You could also rent the movie for $3.99 on Amazon Video or iTunes or buy it outright for $7.99 on Amazon Video and $14.99 on iTunes. Unfortunately, the movie isn't on any streaming services, but you may be able to catch it in theaters, as some movie theaters are bringing back the classic for the holidays. You can check Fandango or your local theater's movie schedule to see if it's showing near you.

If you live in Fort Collins, Colorado, or nearby, you could also see A Christmas Story: The Musical. The Broadway production of the musical didn't last very long but it did get a number of Tony nominations back in 2013, and the show in Fort Collins sold out last year, so it's definitely a popular one to see. Honestly, I'm sad I missed it while it was in New York. Anyone else open to a revival? It's just a thought.

Additionally, if you live in or around Cleveland, Ohio you could also get into the spirit by visiting the A Christmas Story House & Museum. Although the film took place in Indiana, it was actually filmed in Cleveland and Toronto, Ontario. The museum allows fans to see what Ralphie's home looked like and also impart fun trivia and facts about how the movie came to be. You can also buy your own leg lamp from the gift shop, though a woodworker recently proved you could just make your own at home.

No matter how you relive the fun of A Christmas Story, it's definitely a great movie to watch this time of year with all of your loved ones, whether it's part of an annual tradition or you're watching it for the very first time.

A Christmas Story has risen in popularity since it first debuted in theaters all the way back in 1983. And now, all of these years later, it's easily become one of the most beloved Christmas movies of all time. It even led to a sequel, A Christmas Story 2, and inspired the popular TV series, The Wonder Years. Fox will also be debuting a live musical centered around the story titled A Christmas Story: Live. It won't have the same cast as the original, but it's sure to get you in a festive mood.

If you've never seen A Christmas Story, there's no better time to watch it than now, and if you've already seen it, why not watch it again? It is a classic after all.