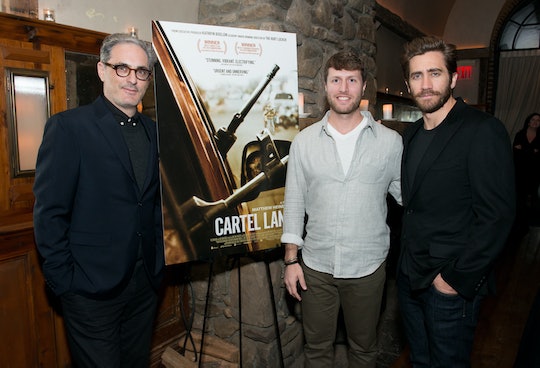 How To Watch 'Cartel Land', Because You Need To Watch This Oscar Nominated Documentary Right Now

We've all heard of the proposed wall between Mexico and the United States. Donald Trump, famous New York businessman and Republican presidential candidate, has built a steady following for himself largely on the premise of increased border security. The highly successful Mexican drug cartels are one of the main concerns. I'm wondering if Trump happened to watch Cartel Land, the critically acclaimed new documentary directed by Matthew Heineman about the terrifying Mexico-U.S. border drug cartels. It's fearless and frightening and absolutely topical for this very moment. So how do you watch Cartel Land?

The documentary can be streamed on iTunes, and as of January 2016, it has become available on Netflix. I would recommend getting in your fix before we hit Oscar night this Sunday, Feb. 28th beginning at 5:30 p.m. Although, fair warning here, you won't walk away unscathed. You might walk away wondering how on earth director Heineman (whose brilliant, fearless direction won Best Director U.S. Documentary as well as Best Cinematography, U.S. Documentary at the 2015 Sundance Festival) is even alive today. What started out as a documentary about extremist American vigilantes who patrol the Mexican border in Arizona eventually went on to encapsulate the story of the Autodefensas, a group of Mexican civilians waging war on the drug cartels. Cartel Land became the story of parallel worlds, of two sides fighting the same war.

The documentary focused in on the two leaders of each faction. One of the most intriguing characters is Dr. Jose Manuel Mireles who fashions himself as a general coordinator of Mexico's Autodefensas, a citizens' paramilitary group whose lofty goal is to rid their area of drug cartels in the Mexican state of Michoacan. An affable cowboy-type in a black hat, Mireles, who is a surgeon and a grandfather, struggles with trying to define the work of the Autodefensas... and struggles even harder to keep their organization from becoming precisely the thing they are fighting against. The drug cartels.

Across the border in Arizona is Tim "Nailer" Foley, the leader of Arizona Border Recon. The Arizona Border Recon is comprised primarily of hardened military veterans. Their prime focus is to protect what they refer to as "America's own little war zone." Foley is a passionate vigilante who told ABC15.com, "There is the war on terror and the war on drugs. They are coming together and they are both happening right here."

If you're looking for good guys vs. bad guys, Cartel Land probably isn't for you. As Heineman told Anthem magazine, "This is not a traditional “cause” film. You don’t walk out of the film and sign a petition. My goal was to provide a window into a world that you never get to see, to put a face to this cartel alliance that’s resulted in 100,000-plus people being killed and 20,000-plus people disappearing since 2007."

And what does Heineman think of the idea of a border wall? Here is what he told Ted Johnson of Variety:

The elephant in the room in all of this is America’s voracious appetite for drugs. Stopping the border is something we have tried to do for decades. The cartel will always find a way to ship drugs northward. They are using all different means of doing so. They are still doing the old school way of walking across the border with backpacks. They have tunnels. They have submarines. They have aircraft. The drugs will always find their way northward. Similarly, guns will always find their way south as well as the money that is reaped from selling all these drugs. This cycle of supply and demand, I don’t see stopping any time soon.