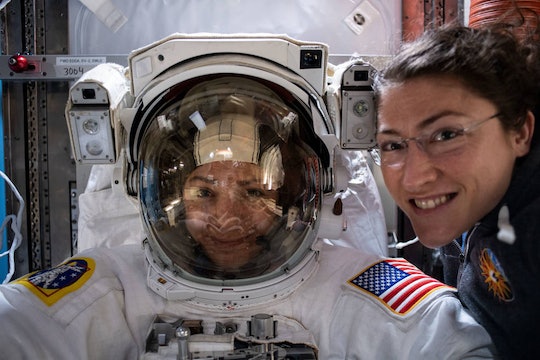 It finally happened. On Friday, Oct. 18, two female astronauts, Christina Koch and Jessica Meir, made history when they became the first two women to step outside the International Space Station for a spacewalk. And if you're wondering how to watch NASA's first all-woman spacewalk and witness this historic moment unfold, technology has made it very simple to do so.

To watch Koch and Meir's historic spacewalk, just head over to NASA's livestream on YouTube, which started just before 8 a.m. EST. And if you're just tuning in, no worries — you can rewind and start from the beginning.

Koch and Meir's duties during their mission were "to replace faulty equipment on the station’s exterior," including a faulty battery charge, according to NASA. Today's mission marked Koch’s fourth spacewalk and Meir’s first.

The first all-female spacewalk was originally scheduled to take place earlier this year, but had to be cancelled because NASA did not have enough spacesuits in the proper size for both Koch and another female astronaut, Anne McClain, posing safety issues. While the news prompted criticism and backlash, McClain, who'd been replaced by a male astronaut, took to Twitter to share the reasoning behind the cancellation. "This decision was based on my recommendation. Leaders must make tough calls, and I am fortunate to work with a team who trusts my judgement," McClain tweeted in March. "We must never accept a risk that can instead be mitigated. Safety of the crew and execution of the mission come first."

Ahead of Koch and Meir's historic spacewalk on Friday, the two spoke with reporters about what it's like being women working in space and their upcoming mission.

"I think it's important because of the historical nature of what we're doing and that in the past, women haven't always been at the table," Koch said at a news conference on Oct. 17, according to CNN. "It's wonderful to be contributing to human spaceflight at a time when all contributions are being accepted, when everyone has a role and that can lead, in turn, to increased chance for success."

Meir echoed Koch's thoughts in the same news conference. "What we're doing now shows all the work that went in for the decades prior, all of the women that worked to get us where we are today," Meir said, as ABC News reported. "I think the nice thing for us is we don't even really think about it on a daily basis, it's just normal. We're part of the team, we're doing this work as an efficient team working together with everybody else, so it's really nice to see how far that we've come."

And to mark this historic moment, Meir shared an awesome photo of her and Koch and, of course, an obligatory selfie. "Gearing up for Friday’s spacewalk to help the ground teams repair one of the battery channels with @Astro_Christina," Meir tweeted earlier this week. "... first spacesuit selfie, check!"

McClain, who'd been originally scheduled to take the first all-female spacewalk, also chimed in on Twitter, saying the astronauts taking part in this mission "are the A-team!"

It's taken more than five decades of spacewalks to get to this historic moment and it's finally a reality. A reality that girls today can look to and be inspired to make history themselves.