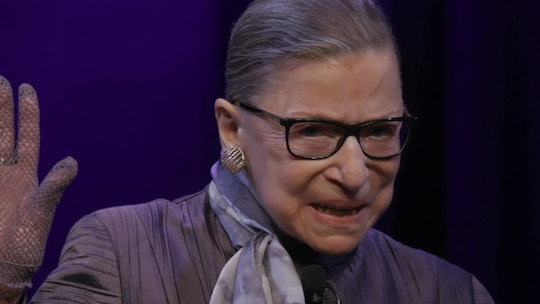 You can't spell truth without Ruth — and the truth is, if you haven't seen RBG, the documentary based on the legacy of U.S. Supreme Court Justice Ruth Bader Ginsburg, then you need to do it ASAP. The film, which was released by Magnolia Pictures in May 2018, was recently nominated for an Oscar. And since the documentary was only released to a small number of theaters and aired on CNN during Labor Day Weekend, the award show buzz has people curious about how to watch RBG documentary after the Oscars.

For those of you wondering why you should care, Ginsburg's story is incredible — and RBG tells just that. Ginsburg is the second female justice that the U.S. Supreme Court has ever seen. She tirelessly fought for gender equality and surprisingly became known as a pop culture icon.

In an interview with The Brown Daily Herald, director Betsy West and Julie Cohen explained that they chose to make RBG because they found that most of Ginsburg's fans didn't know her whole history, which deserved to be told.

“We had learned then about her extraordinary story — both the challenges she faced as a brilliant young lawyer, and how she took on the centuries of discrimination as a litigator in the Supreme Court and changed the world for American women,” West said. “Beyond the memes and the t-shirts and the tattoos, there is one extraordinary person whose story is inspiring."

RBG is nominated for an Oscar alongside popular documentaries, such as the rock-climbing feature, Free Solo, and an examination of the gap between adulthood and childhood, Minding the Gap. West and Cohen were the ones to tell Ginsburg, who was recovering from a surgery she had a month prior to the nomination announcement, that she was now the subject of an Oscar-nominated film.

"We were excited to be the ones to give Justice Ginsburg the good news that RBG has been nominated for Best Documentary," the duo Told CNN in January. "We reached her on the phone at her home in Washington this morning. She congratulated us and said the nomination was 'eminently well-deserved.' She sounded strong and cheerful and said she is writing opinions and continuing to stay on top of work."

Now as the award show draws nearer, it seems that RBG is favored to win by many. So naturally, people watching the awards will be searching where to watch the film from home — and as it so happens, there's some good news, especially if you have a Hulu account.

You can currently stream RBG on Hulu before the Oscars airs on Sunday, Feb. 24. However, you can only watch the documentary on Hulu if you have a subscription, meaning you'll either have to purchase one or try out Hulu's month-long free trial.

That being said, if you don't have a Hulu subscription, then you can also purchase or rent a digital copy of RBG on iTunes, Amazon Video, YouTube, Google Play, Fandango Now, and Vudu.

However you decide to watch RBG, there's one thing for certain: Ginsberg has a powerful story — but we would expect nothing less from the Notorious RBG.

More Like This
How To Watch Elf In 2022, Including A 24-Hour Marathon
All The Nights The Grinch Airs On TV In 2022
Disney Introduced Its First Openly Gay Teen Character In Strange World
20 Of The Best Christmas Movies For Kids