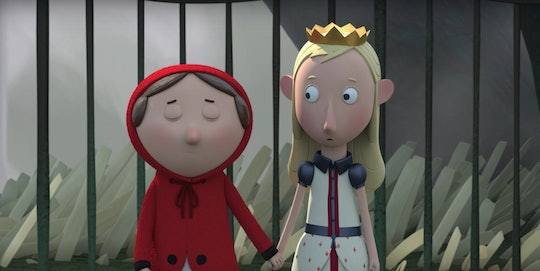 If you were a child at some point between now and the 1960s, it's safe to say you've probably read at least one Roald Dahl book. The late author is known for classics including James and the Giant Peach, Charlie and the Chocolate Factory, Matilda, Fantastic Mr Fox, and The BFG, all of which have been adapted for the big screen. The latest of Dahl's writings to come to life is Revolting Rhymes, a collection of dark poems based on fairytales that was published back in 1982. In late 2016, the BBC turned Revolting Rhymes into a two-part animated special — and it's up for Best Animated Short at tonight's Academy Awards. That being said, many are probably wondering: How can you watch Revolting Rhymes?

The answer is pretty much the best answer one could hope for: You can watch Revolting Rhymes on Netflix. How easy is that?! The special is broken into two "episodes," each clocking in at just under 30 minutes. So if you can find an hour in your schedule for some quick binge-watching before tonight's awards show, you'll be able to seriously impress your friends when the Best Animated Short category is announced.

The book Revolting Rhymes features six poems, each of which is based on a different fairytale: Cinderella, Jack and the Beanstalk, Snow White and the Seven Dwarfs, Goldilocks and the Three Bears, Little Red Riding Hood and the Wolf, and The Three Little Pigs. However, the stories are not told the way you probably remember them. Dahl's retelling gives each of the stories a major twist, and they're all devoid of the typical happy ending.

Jan Lachauer and Jakob Schuh both directed and wrote the adaptation. Since the original book features six separate poems, Lachauer and Schuh were tasked with meshing all the stories together into one polished tale. “We cut the book up and started switching rhymes around and tried to conjoin the separate stories into one story without adding rhymes and without changing rhymes,” Schuh told Variety in an interview. “You want to have these characters that don’t know each other in the book to have a conjoined story with a conjoined ending, so the process was lengthy and tough, I have to say.”

Lachauer and Schuh noticed a theme of strong female characters when they read the book, and they made sure to amplify that in their adaptation. "There are some incredibly complex, strong women there. And so you get the feeling that the book doesn’t use female characters as a sort of constant uplift for male characters, but they’re people that do very surprising things and try to make sense of the hardships they face,” Schuh told Variety. “I wouldn’t say we did that. It’s in the book. But we sort of made that the core theme that carries through.”

That idea is especially evident in the merging of two beloved characters' storylines. “They are basically two young girls and in this book they kind of decide to take their lives into their own hands,” Lachauer told Variety, speaking about Red Riding Hood and Snow White. “But that’s the connection we found in these two stories and in the two characters. And we saw that these two girls basically have very similar approaches to their lives.”

The other films nominated for Best Animated Short are Dear Basketball, Garden Party, Lou, and Negative Space, according to the Oscars website. According to IndieWire (the outlet has written multiple articles about the category), Revolting Rhymes is one of the frontrunners for the award. But if you can't spare an hour this afternoon, the other four films are all seven minutes or less. Happy Oscars!