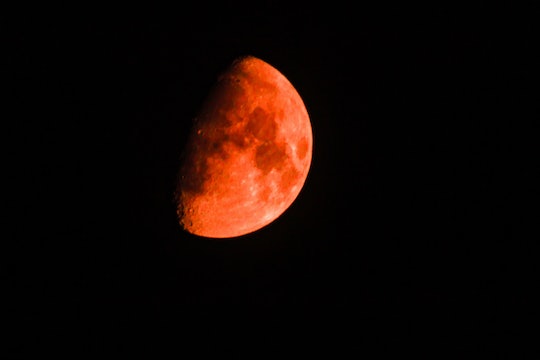 Where To Stream The Blood Moon Today, Because It's Not Visible From The U.S.

If you've been getting psyched about all the buzz leading up to today's blood moon, you might be bummed to learn that the astrological phenomenon (which is actually a total lunar eclipse) unfortunately won't be visible from the United States or anywhere else in North America. That's because the big event is happening during daylight hours in the Western Hemisphere, putting the moon below the horizon where it can't be observed from this part of the world. So how can you see the blood moon if you're not in Eastern Africa, India, or some other ideal viewing location?

Thanks to the magic of streaming, you can watch the eclipse unfold in real time from a laptop or phone anywhere. And you're not going to want to miss this one, because it's literally a once-in-a-lifetime event: As CNN explained, this blood moon will be the longest total lunar eclipse of the century at one hour and 43 minutes — and there won't be another one like it until 2123.

"Lunar eclipses can occur only during a full moon, and this one is extra special because it's also the blood moon," according to CNN. "The moon will be in perfect alignment with the sun and Earth on Friday, with the moon on the opposite side of the Earth from the sun."

When the Earth moves in front of the sun, our planet's atmosphere casts an eerie red light on the moon, hence the "blood" thing. (It's easy to understand why our ancestors saw this occurrence as a potentially ominous sign! It's not often that the sky looks quite so dramatic.) And while the "total" part of this total eclipse will last for less than two hours, which is still remarkably long for an eclipse, the moon will spend close to four hours crossing the Earth's shadow. In fact, there are seven phases of the eclipse, as Business Insider reported, with the first starting just before 1:15 p.m. EDT today, July 27.

"This is when the moon first touches Earth's outer shadow or penumbra. It might look like the moon is getting a bite taken out of it," according to Business Insider.

The moon will start turning orange-red at about 2:24 p.m. EDT when it enters the Earth's central shadow or umbra, and will be completely colored at around 3:30 p.m.; peak time, or "greatest eclipse" (when the moon is closest to the center of the umbra), occurs just before 4:22 p.m. After that, the whole thing starts happening in reverse, coming to completion at about 7:28 p.m.

Now, where can you check all this magnificence out for yourself? You have several options. The website TimeandDate.com will be streaming the eclipse live starting at 2:00 p.m. EDT (18:00 UT) — and if you want to get yourself extra pumped up for the big show, you can also check out their recorded stream of the total lunar eclipse that happened on January 31 of this year while you wait:

The Slooh community observatory will also start streaming the eclipse at around 1:00 pm EDT on their YouTube channel from South Africa, an idea vantage point.

"Slooh estimates that this time around, tens of thousands of people — many of whom probably watched the 76-minute total lunar eclipse back in January — will tune in online," according to WIRED.

Or you can head over to the live stream from The Virtual Telescope Project (a robotic facility which uses remotely controlled telescopes to offer real-time observations of the Universe), which should start at around 2:30 EDT:

If you're not free to drop everything to observe the movement of the moon all afternoon, don't despair: There'll be plenty of recorded footage and photos online after the fact. It's not quite as exciting as seeing it happen live, but you can always pretend (and in a way, it'll be more fun to watch when the lights go out!).