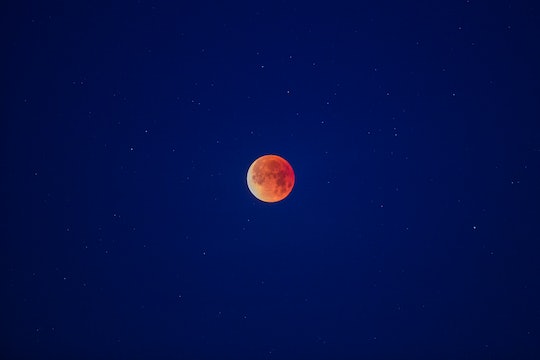 The Longest Blood Moon Of The Century Is Coming, But You May Not Be Able To See It

There's something about the moon and the stars that's just so romantic. Growing up in New York City made stargazing a scarce occurrence for me, so I used to love lying in the grass staring at the stars when I would visit my grandparents or go away to camp in Connecticut. In fact, getting lost in the night's sky is probably one of my favorite things to do. Whenever there is an exciting astronomical event happening, I always feel like I have to see it. So, when is the next blood moon 2018? I love these types of eclipses because they make the moon look bright red-orange, kind of like a blood orange, and when you get a good view of one, they really are pretty magnificent. We’ve been blessed with so many astronomical events recently between the eclipses, blue moons, and meteor showers, that this is just another one you shouldn't miss. If you're a star lover like me, here's what you should be looking for and when.

According to USA Today, this upcoming lunar eclipse will be "the longest of the century" with visibility nearly two hours long. It will occur late on July 27 and go into the early morning hours of July 28. But unfortunately, it will not be visible to us in North America. In fact, North America is the only continent that will not have a view — ugh. The article continued to mention that the best views will be from Africa and Asia. Partial views will also be visible from Australia, Europe, and South America, so if you're in any of those areas on the globe, you're good. You can find a detailed map with all the visibility areas in the same USA Today article.

These types of lunar eclipses are nicknamed "blood moon" because of their bright red appearance — the moon gives off a bright red-orange color when we view it from Earth. While it may be disappointing that this eclipse event will not be visible to us in North America, there is some exciting news about Mars. USA Today mentioned in their article that, this month, Mars will be the closest it's ever been to Earth since 2003, making summer stargazing that much more exciting.

According to the National Aeronautics and Space Administration (NASA), what causes this type of eclipse is the placement of the sun and the moon. When the sun and moon align on opposite sides of the earth, the earth blocks the sun from reaching the moon and casts a shadow. The atmosphere then filters out blue light, which causes the moon to look red to us on Earth. Pretty cool, huh?

Unfortunately, those of us in North America may need to wait. The next lunar eclipse that will be visible in North America won't be until Jan. 21, 2019. While we won't be able to see this special summer eclipse in the United States and Canada, you can live stream the event at The Virtual Telescope Project 2.0 website for those of you who just have to experience it live.

Other noteworthy astronomical events you may not want to miss are the Lyrid Meteor Shower, which happens annually and will peak April 22-23, 2019. Another exciting event to look out for is the next Blue Moon, which will occur May 2019. While a Blue Moon doesn't actually look blue normally, it is a full moon that shines bright, appearing bigger and brighter than usual. A Blue Moon can appear with a blue hue, however, due to volcanic gases from the earth, according to space.com.

The summer is a great time to get out and watch the stars. So whether there's an eclipse happening or not, grab a blanket, grab a loved one, and get comfortable. You never know what you might find when you get lost above.