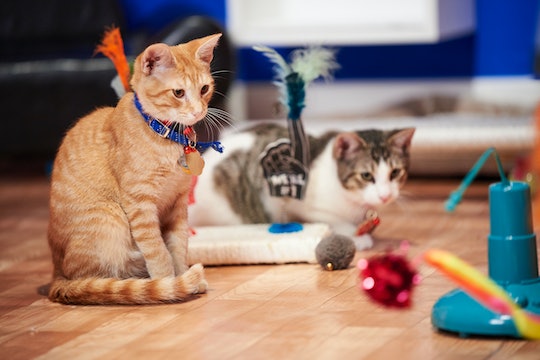 Five years after the Kitten Bowl first premiered, the Hallmark Channel is finally giving the fans what they want by expanding its cat content. This year will mark the first ever Cat Bowl, which will feature cats who have graduated from the Kitten Bowl. So because I know you want to tune in, here's how to watch the Cat Bowl.

According to a press release on Hallmark's website, the first ever Cat Bowl will premiere on the Hallmark Channel on Saturday, Feb. 2, at 10 p.m. ET. If you have cable, you can easily tune into the cat-stravaganza by putting on the Hallmark Channel. If not, you can stream the entire event via Hallmark Channel Everywhere, as long as you have a cable provider login. In case those options do not work for you, there's always the whole sign-up-for-a-free-trial-and-then-cancel-it thing. Basically, sign up for a free trial of service that allows you to stream live TV, such as Hulu, fuboTV, or Sling TV, and make sure to cancel before it charges your card. Hey, it's legal!

Like the Kitten Bowl and the Puppy Bowl, the Cat Bowl is part of Hallmark's "Adoption Ever After" initiative, which aims to encourage people all over the United States to adopt pets. All three Adoption Ever After events are produced in partnership with the North Shore Animal League, the earth's largest "no-kill rescue and adoption organization," according to its website.

And as Hallmark's press release notes, the organization is providing all the pets (aka the "cat-letes") for the Cat Bowl, all of whom are available for adoption. The Cat Bowl in particular will focus on senior and special needs cats; not to mention, hundreds of local shelters across the nation have partnered with the event to showcase animals who are available to local viewers for adoption. Plus, if you've ever watched the Kitten Bowl, you may recognize a few familiar faces during the Cat Bowl. As Hallmark noted in its press release, the Cat Bowl will include a segment called "Where Are They Meow," which will show off where former Kitten Bowl competitors are now (hopefully, all adopted into loving homes).

Both the Cat Bowl and the Kitty Bowl are being hosted by Beth Stern, a TV personality and champion cat fosterer. She and her husband, radio host Howard Stern, have fostered more than 500 cats and kittens together in their home, according to an interview with Architectural Digest. Plus, her Instagram is about 99 percent cat photos. Joining Stern as co-hosts are actors Alison Sweeney and Cameron Mathison. Based on Mathison's Instagram and Sweeney's Instagram, they are both big pet lovers, so it makes sense that they'll be providing commentary at the Cat Bowl.

While the Cat Bowl sounds like it will be the cutest thing ever (well, tied for cutest thing ever along with the Kitten Bowl and the Puppy Bowl), it's important to remember that the core aim of the event is to get as many animals adopted as possible. According to the ASPCA's website, about 1.5 million shelter animals are euthanized in the United States annually. You can help that statistic decrease by fostering or adopting a pet. Every time an animal is adopted, more space opens in shelters, therefore saving more animals lives. So this Saturday night, feel free to let the adorable cats claw their way into your heart.