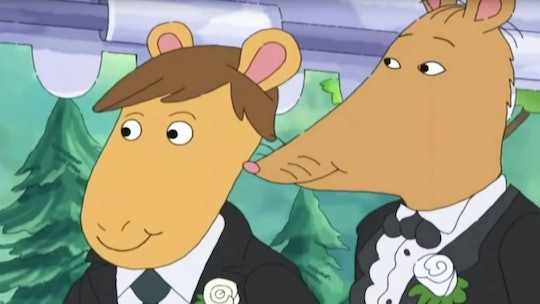 After a lifetime of disappointing faves from my childhood, I'm happy to announce that I can still stan Arthur, the PBS Kids program that follows an anthropomorphic aardvark. On May 13, the network debuted its 22nd season with "Mr. Ratburn and the Special Someone," which featured a same-sex marriage between Mr. Ratburn and his partner, Patrick. Although many longtime fans and parents applauded PBS, Alabama Public Television (APT) decided not to air the episode. So if you and your kids missed out on history being made, here's how to watch the gay wedding Arthur episode in Alabama. Because everyone should be given the opportunity to have open conversations about LGBTQ+ representation and identities.

As of this write-up, you can watch Arthur Season 22, Episode 1 online for free on PBS.org and PBS Kids. But, if you want to do so, you better do it quick, as the episode expires from PBS' website on May 24. And while there is no expiration date given on the PBS Kids website, it's likely the episode will be taken down eventually, since other full episodes featured on the site are from Season 7. You can also download the PBS Kids Video app on your Android or Apple devices to stream the new episode for free.

That being said, you still have plenty of other options when it comes to watching "Mr. Ratburn and the Special Someone" online. However, it will cost you a bit of money. If you want to own the Arthur episode, then you can purchase it on Vudu or Amazon Video. You can also purchase the PBS Kids app on Amazon for $4.99/mo.

According to AL.com, APT director of programming, Mike Mckenzie, revealed that the choice not to air the Arthur episode was made back in April and the Alabama network had no plans of airing the episode in the future. Mckenzie also suggested that the episode wasn't appropriate for kids to watch without supervision.

"Although we strongly encourage parents to watch television with their children and talk about what they have learned afterwards – parents trust that their children can watch APT without their supervision," Mckenzie said in a statement. "We also know that children who are younger than the ‘target’ audience for Arthur also watch the program.”

AL.com then pointed out that APT previously pulled an old Arthur episode from 2005 that featured Buster visiting a girl with two mothers.

“'Our feeling is that we basically have a trust with parents about our programming," then-director, Allan Pizzato, told the publication in 2005. "This program doesn't fit into that."

In a statement courtesy of People, PBS explained that the gay marriage scene in Arthur was meant to more accurately illustrate the "diverse communities" of our world.

“PBS KIDS programs are designed to reflect the diversity of communities across the nation," the statement read. "We believe it is important to represent the wide array of adults in the lives of children who look to PBS KIDS every day,” the network stated."

Meanwhile, Arthur's creator, Marc Brown, found APT's decision disappointing. “I’m really proud of that episode. And I will defend it to anybody who wants to talk about it,” Brown told People.

The creator also questioned APT's discomfort with the episode. He said:

Why shouldn’t their teacher marry another man? We all know people who are gay, who are trans, and it’s something that is socially acceptable. Why is there this discomfort that it takes a leap into our national media? I don’t want children or people who are different to feel excluded. That’s not the kind of world we want to live in. And we want children to be educated so they can see there’s not just one type of family. Everyone should feel represented. I think we did that with Arthur.

I couldn't have said it better myself. Now, if you missed out on watching the Arthur episode, what are you waiting for? Go watch it online — or better yet, contact APT and demand more LGBTQ+ visibility.