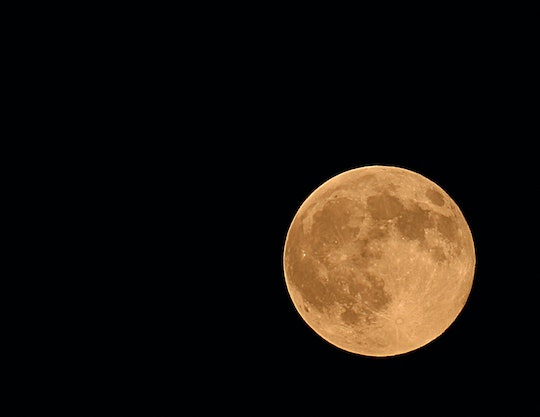 Now that autumn is here and truly upon us, we can fully enjoy the colors, the brisk air, and the ever-forgiving-yet-stylish slouchy sweaters in flattering neutral shades. The pumpkin spice lattes, of course, and the night sky. The cooler weather brings with it a brilliant, clear, starry night sky more often than not (if we're lucky), and a better look at the moon. Within the next week, you're going to want to keep an eye out for the Harvest Moon, because it's always spectacular. But this year, it promises to be more spectacular than ever.

On Oct. 5, the Harvest Moon will actually be the October Full Moon, which only happens every three years or so. Generally speaking, the Harvest Moon falls in September on the autumnal equinox, or first full day of autumn (Sept. 22 here in the northern hemisphere). Because of the change in dates, the Harvest Moon will rise almost immediately after sunset for several days. It will appear as a full moon in the sky for several days as well, which always ends up feeling a little special/eerie in October. It's called the "Harvest Moon" because, traditionally, farm workers were able to use the bright light of the full moon to harvest their summer crops.

In October, the full moon goes by several increasingly romantic and fantastical names that will probably make you appreciate it even more; the Full Hunter's Moon, the Travel Moon, and the Dying Moon. Remind me later; if I ever write a young adult trilogy to name it after these three moons. I'll make a killing.

The name Harvest Moon is also said to be based off a 1903 poem by Norah Bayes and Jack Norworth called Shine On Harvest Moon:

So now that you have a little history, you're going to want to bundle up in your most adorable sweater and boots and find a place to watch the Harvest Moon. According to Space.com, the Harvest Moon will be 100 percent full at 2:40 PM Eastern Time. Unfortunately, if you're living in the continental United States you won't be able to see the moon at this point because it will be below the horizon.

Fret not though; the moon is meant to look pretty full for several days. It will rise in New York City at 6:51 p.m. Eastern Time on Thursday, and set the next morning by 7:40 a.m. Personally, I suggest a witches' meeting a la Hocus Pocus, if you have two friends who might be in the mood to howl at the moon with you.

This year, the Harvest Moon is expected to make a close pass by the planet Neptune. While those people living on the East Coast won't get a chance to see the moon pass over Neptune — also known as an occultation, when one celestial object passes over another — because it will still be below the horizon, West Coast night owls might have better luck. If you have binoculars or better yet, a telescope, you might get a chance to see the occultation shortly before 4:00 a.m. Pacific Daylight Time, around 30 minutes before the moon sets.

However you manage to catch the Harvest Moon this year, just be sure to catch it if you can. Stand outside in the fresh, cool air. Look up at the sky, breathe deep. And marvel at the moon looking down on you. Because for some of us, winter is coming and we'll definitely miss days like these.