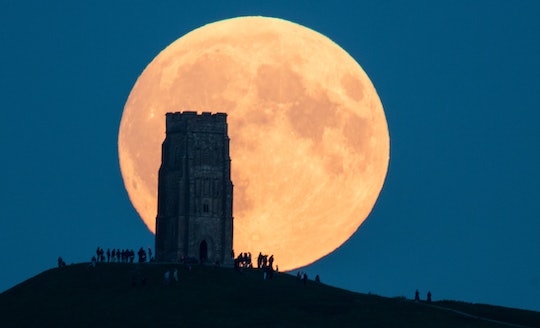 There Won't Be Another Super Blood Wolf Moon For Years, So *Don't* Miss This One

A gorgeous and rare lunar phenomenon will be taking over the skies on Sunday night, making it a field day for star gazers and photography buffs alike. If you're wondering how to watch the super blood wolf moon, the good news is that it should be pretty easy to see no matter where you live.

Unlike some past eclipses where you had to be in certain areas to get the best view, this one should be visible from just about anywhere in the U.S. And you've got a pretty good chunk of time to catch the main event, because according to CBS News, it should span about four hours from roughly 9:30 p.m EST on Sunday, January 20 until around 1:50 a.m. EST Monday, January 21. Falling asleep too early or bad weather in your neck of the woods might be the only thing standing in your way.

So what exactly is the super blood wolf moon? Well, it's not the name of a new Netflix series about werewolves (though if it was, I'd definitely watch). You have to break down all the different parts of the name to understand where the moniker comes from. Sunday's event will be a total lunar eclipse, and according to the Wall Street Journal, it's the only one we'll see in 2019. During a lunar eclipse, Accuweather explained that the moon passes through the shadow of the Earth, which turns it an orangey/red color — hence the 'blood' component of the super blood wolf moon.

It's also a super moon because it'll appear larger than normal. That's due to the fact that the moon will be closer than usual, according to Earthsky.org. The moon will be more than 252,000 miles away from Earth at its furthest in 2019. But during the super blood wolf moon, it'll be just 222,000 miles away. Those 30,000 miles may not mean much in terms of space travel, but they make a noticeable difference to the naked eye.

The super blood wolf moon is totally safe to watch without any special eye protection (as are all lunar eclipses), according to Travel and Leisure. It's also fine to use a telescope, binoculars, or zoom lens to get a better view. Your regular phone camera may have trouble taking moon pictures that do it justice, so Life Hacker suggested downloading some special apps for better images.

If you miss out on the super blood wolf moon this time around, mark your calendar for January 31, 2039 — that's the next time we'll see this rare combination of lunar events, according to Cnet. (So better be prepared for this one!)