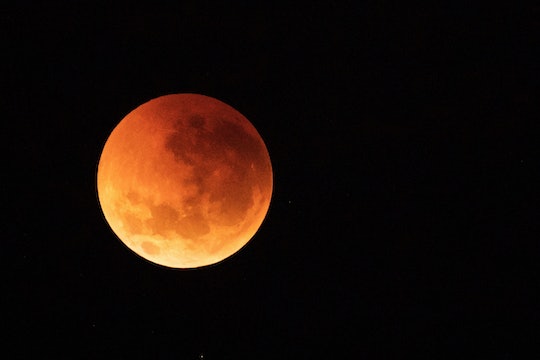 Mark your calendar and brace yourself. In just a little over a week we're going to be witnessing a "super blood wolf moon," and I for one am super excited about it. To be honest, I'm mostly just assuming it's going to be cool because it officially has the most badass name ever. What exactly is it, though? If you're as clueless as I am, you've probably got questions. Here's everything to know about the super blood wolf moon eclipse that's happening this month, from when to expect it and what exactly you'll see.

First things first: Let's break down what each part of this name actually means. "Super" comes from "supermoon," which you've probably heard before. "A supermoon happens when the full moon coincides with the moon's closest approach to Earth in its orbit," explains Space.com. "Supermoons make the moon appear a little brighter and closer than normal, although the difference is hard to spot with the naked eye." The last supermoon occurred in January 2018, according to EclipseGeeks,com, so it will have been a little over a year since we've gotten this celestial treat.

OK, so what's a super blood moon? Though the name sounds incredibly creepy, it could just as easily be called a rose moon or a scarlet moon: that's because a blood moon simply describes the phenomenon when the moon appears red or orange in color. As Earth Sky explains, sunlight is made up of frequencies that are filtered out as the pass through the atmosphere; however, the portion of the light spectrum that creates the color red remains. During a lunar eclipse, as this red light hits Earth's surface and exits on the other side, it hits the moon. "Depending on the conditions of our atmosphere at the time of the eclipse (dust, humidity, temperature and so on can all make a difference), the surviving light will illuminate the moon with a color that ranges from copper-colored to deep red," Earth Sky sums up.

As for the "wolf" part... well, that's simply the phrase used to describe a full moon occurring in the month of January. As Farmer's Almanac explains, "Amid the cold and deep snows of midwinter, the wolf packs howled hungrily outside Indian villages. Thus, the name for January’s full Moon." It doesn't change what this full moon is going to look like, but it definitely makes the experience sound even more supernatural.

Now that you understand what a super blood wolf moon eclipse actually is, get excited because it's happening on January 20 and 21. "With Earth between the Sun and Moon, our satellite in its 'full' phase will turn a gorgeous red-orange-copper color for an hour or so during this Total Lunar Eclipse," according to Forbes. Those in Pacific Standard Time can catch the total eclipse at 9:12 P.M., while those in Eastern Standard Time will have to stay up until 12:12 A.M. to catch it. Of course, I'd recommend getting comfortable and watching the pre-show: you'll be able to see the transformation from partial eclipse to total eclipse if you start watching about an hour beforehand.

Not only can you enjoy the super blood wolf moon eclipse coming our way, but now you can also educate everyone in your company about what that long name actually means. Keep in mind that Americans won't be able to witness another Total Lunar Eclipse until May 2021, according to Forbes, so don't miss out and suffer from major eclipse FOMO.

More Like This
22 Super Sweet Valentine's Day Poems For Kids
17 Fun & Interesting Facts About Valentine’s Day
Galentine’s Quotes For Your Friends, Because Love Goes Beyond Romance
35 Children’s Books Starring Black Characters
What Parents Are Talking About — Delivered Straight To Your Inbox