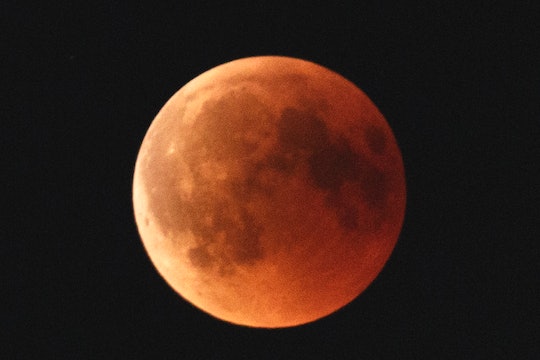 The Super Blood Wolf Moon Is Coming Soon, & You Definitely Don't Want To Miss It

You've heard of a blue moon. You've heard of a new moon. You've heard of a bad moon on the rise. But you probably haven't heard of this month's moon: As the Old Farmer's Almanac tells it, in January of 2019, the moon will be a both a Supermoon and a total lunar eclipse, making it a very badass-sounding "Super Blood Wolf Moon." When exactly is the Super Blood Wolf Moon? And why does it sound so dang ominous? This is one particular phenomenon you probably don't want to miss out on — think of all the great photos you can take of this breathtaking celestial occurrence.

This beautiful event will be visible in the U.S., South America, Greenland, Iceland, West Africa, and Western Europe on January 20 and 21, depending on your time zone, reported PopSugar. As far as it being a “Wolf” moon, you don't have to worry about a surplus of werewolves roaming the streets. This type of moon got its name from the Native Americans, who said that “it appeared when wolves howled in hunger outside the villages." according to the Old Farmer's Almanac. (And those were normal wolves. Not the kind that start out as people.) What it means now, however, is that it’s the first full moon of the year, as a Forbes article explained. How will we know this moon is different from any other old moon? It will be blood red. That’s right. Blood. Red.

This particular eclipse is a total lunar eclipse, in which the moon appears darkened as it passes into the Earth's shadow, making the moon appear to be deep crimson. Sorry, I can't get over how awesomely creepy and completely metal this will look. I know I'll be outside trying to catch a glimpse on January 20.

And even though the name “Blood Wolf Moon” sounds super scary and foreboding, it’s really no biggie — as in nothing bad is supposed to happen. Not because of the moon anyway, said the Forbes article. Many religions and superstitious folks believe a total lunar eclipse will cause earthquakes, volcanic eruptions, and other natural disasters. And while Forbes acknowledged that there has been some scientific data to back this claim up, a "more recent analysis of earthquakes with a magnitude greater than 8.0 found no correlation with the lunar cycle."

"The overall odds of an earthquake striking a particular location during a full moon remain so small that worry about a moon-quake connection is kind of like leaving town every time there's a thunderstorm because you're worried of the increased risk of a plane crashing into your house," the article noted.

However, according to the moon folklore in the Old Farmer’s Almanac, we do have to worry about it being a dry year for farmers: “A bright first Moon promises rain and a bountiful harvest; a red-tinted Moon means a dry year."

So no matter what you believe, even if you live by a volcano, it seems pretty unlikely something catastrophic will happen — just maybe a dry year if you're a farmer. Don't worry, you will be totally safe on January 20 to get yourself outside to take a ton of pictures of this badass metal moon. If you do miss it however, thankfully, it happens every one-to-three years.

Editor's note: This post has been updated with the correct definition of a lunar eclipse.