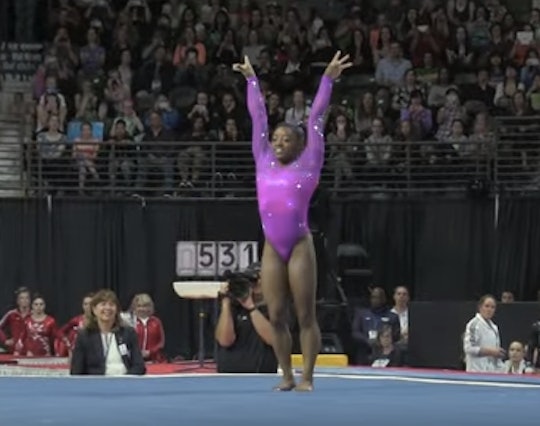 The bloody feet, the crying, the perfect landings. It's almost time again to sit around in sweats and watch some of the best athletes in the world contort themselves into impossible positions that are at once beautiful and terrifying. Here's how to watch the women's Olympics gymnastics trials. Prepare for some serious shock and awe at what these women can do with their bodies.

The women's Olympics gymnastics trials to set the official teams for the Rio Games this summer start on Friday night at 8:30 p.m. on NBC. Fans can tune in live to NBC or NBCSN, or livestream the video footage online. The trials last four days, and can be watched live on Friday, Sunday, July 8, and July 10. The trials, which will not only determine who qualifies for the Rio Games in August, but also national titles, will be held in San Jose, California. The team will be announced on July 10 when the competition ends. While 15 gymnasts have advanced from the women's P&G Gymnastics championships in St. Louis on the weekend, only five women will continue on to the 2016 Olympic Games in Rio De Janeiro, Brazil.

Well, obviously if she is a healthy girl, it’s not even any kind of question mark, Karolyi said. After winning three world championships and doing this competition, two days of great consistency, there are no questions.

The top five competitors at the P&G Championships (and the likely roster for the Olympic team) are as follows:

Sports analysts including Nancy Armour from USA Today agree that the women's gymnasts are looking stronger than ever for the Rio Olympics.

Deep as the group of contenders is — the Americans could easily send two squads to the Olympics and both would return with a medal — the five women who will likely be the Rio team clearly separated themselves from the pack at this weekend’s U.S. gymnastics championships.

While there might not be too many surprises when it comes to selecting the gymnasts who will represent their country in Rio this summer, there could be a few surprises at the game. One competitor in particular, 16-year-old Laurie Hernandez, doesn't have the same level of experience as some of the more senior girls but managed to finish third in all five of her events.

It's going to be great watching these girls in Rio... from my sloth position on my couch.