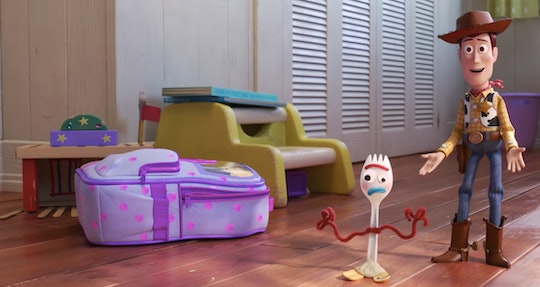 How To Watch The Adorable & Golden Globe Nominated 'Toy Story 4'

The fourth installment of everyone's favorite toy saga hit theaters back in June, but for those who missed its much-awaited debut, it's not too late to take in the splendor that has been nominated for a Golden Globe. Although it hasn't made its way to streaming platforms just yet, there are a few ways you can watch Toy Story 4. I'm telling you, you won't want to miss out on the gang's latest adventure with their hilarious new pal Forky.

Toy Story 4 follows Woody, Buzz, and their old friends as they embark on a rescue mission to save Bonnie's new creation-turned-BFF Forky the spork. In the course of his travels, Woody wanders into dangerous territory before bumping into his old friend Bo-Peep and it all adds up to a quality addition to the film series that has been enthralling audiences for decades.

Now that the fourth movie has been nominated for a Golden Globe — along with The Lion King and Frozen 2 in the Best Motion Picture - Animated category — there's no better time to join in on the fun. For those who have opted into the magic that is Disney+, the good news is that the film will eventually make it to the platform, as all of the other Toy Story movies are now housed there. And Disney+ announced on Jan. 2 that Toy Story 4 is expected to make it to the streaming platform sometime in 2020. But because Netflix still currently has rights to Toy Story 4, there's still no concrete, confirmed date on when it'll make its move to Disney+. Currently with Netflix, you can watch Toy Story 4 via DVD or Blu-Ray.

Unfortunately, it doesn't look like Toy Story 4 is going to be available to stream on Netflix U.S. immediately. If you're willing to pay, there are a couple of renting options online to stream. The movie is available for purchase on Amazon Prime, iTunes, Vudu, Xfinity, Google Play, FandangoNOW, and Microsoft Movies & TV for $12.99 and to rent on FandangoNOW in HD for $5.99 or SD for $4.99.

International viewers in the U.K. and other parts of the world may be able to stream the movie on their versions of Netflix, according to What's On Netflix, but no definitive announcement has been made at time of publication.

Fans waited nine long years for the follow-up to the stunning Toy Story 3, and the fourth movie did not disappoint. Beginning two years after Andy passed his beloved toys on to neighbor Bonnie, many familiar faces are still around — along with a brand new friend. The film earned over a billion dollars in its first year, joining the ranks of only four other Pixar films to do so, as Variety reported.

Only time will tell if the toys will bring home a Golden Globe along with Bonnie's friend Forky on Sunday night. But either way, it's a film that you won't want to miss — regardless of how you watch it.

More Like This
13 Of The Best Pixar Shorts To Put On When You Just Need To Distract Your Kid
Is 'Hocus Pocus' Too Scary For Kids Under 5?
'Hocus Pocus 2' Gives Us A Glimpse Of The Sanderson Sisters As Kids
Disney+ Just Added A New Sing-Along Version Of The Nightmare Before Christmas