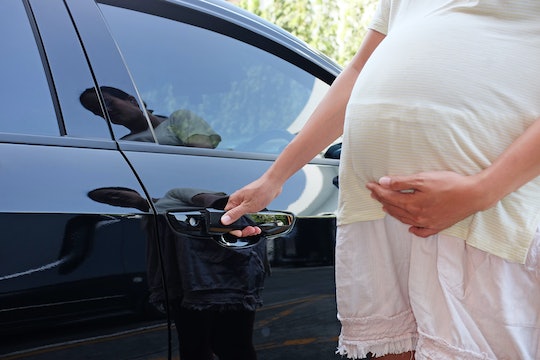 How To Wear A Seat Belt While Pregnant, Because Not Everyone Gets It Right

Pregnancy is filled with countless discomforts: nausea, aches, swollen ankles, hyperactive bladder... the list goes on. Then there are the inconveniences moms impose on themselves for the baby's sake, which can seem like an even bigger burden. (Sushi and merlot, how we miss thee!) You'd think the universe would cut you some slack where it could. If you're looking for a break when it comes to your safety, don't hold your breath, especially when it comes to buckling up. And when you're in a car, you want to make sure you're wearing your seat belt properly when you're pregnant, because not everyone does it correctly.

Surprisingly, a startling number of moms-to-be don't even buckle up in the car. In a recent study published in the Journal of Obstetrics and Gynaecology Research, one-third of pregnant women admitted never using a seat belt while riding, either before or during their pregnancies. Fewer than 20 percent said they always used one. Age and prior knowledge were major factors that determined seat belt use; women over 30 and women who had been advised to wear belts were more likely to use them consistently. And the respondents were just as apt to skip the belt in their first trimester as they were in later months.

Expectant moms may forgo wearing seat belts because they're too uncomfortable, or because they're worried that the tight strap might harm the baby. But experts caution that driving or riding without a belt puts you and your unborn child at greater risk than buckling up. Approximately 92,500 pregnant women are involved in car crashes every year, according to statistics cited in the American Journal of Lifestyle Medicine. The journal added that car accidents are the leading cause of maternal and fetal death. They also increase the risk of preterm labor, miscarriage, stillbirth, and placental abruption (the separation of the placenta from the walls of the womb), according to the March of Dimes.

"There’s an erroneous perception among some women that wearing a seat belt is harmful to the fetus during a crash," said Lisa Hyde, a principal investigator in a study by University of Utah and University of Pittsburgh on seat belt use during pregnancy. The study found that in car crashes, pregnant women without belts were three times more likely to experience fetal death as buckled-up moms, and twice as likely to suffer excessive bleeding.

On the contrary, a properly positioned seat belt doesn't harm a growing baby, which is cushioned by the uterine fluid and the mother's abdomen. Laura Riley, MD, medical director of labor and delivery at Massachusetts General Hospital, told ABC News, "There's multiple layers of protection between the seat belt strap and the fetus."

So if you're expecting, wearing a seat belt every time you get into a car is the best thing you can do for your own safety and for your baby's. The key is to put it on the right way.

Buckling up safely may feel confining, but it's worth a few weeks of discomfort if the result is a safer mom and baby.