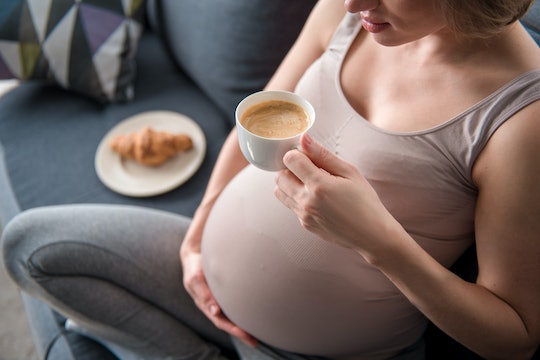 Pregnant Women May Want To Scale Back On Their Daily Caffeine Fix For This Reason, Study Finds

Although it's typically always worth it in the end, giving up certain foods and habits while pregnant can be really hard. That's exactly why so many women talk with their doctors, do their own research, and decide what's best for them and their lifestyles. Smoking, for example, is usually an obvious thing to quit while pregnant, but others things, like forgoing coffee for nine months, are tougher calls. Now there's more data that shows too much caffeine during pregnancy could hurt your child's health later in life, according to a new study from the Norwegian Institute of Public Health.

You might want to hold off on judging women for drinking coffee while pregnant, though, since caffeine comes from so many other beverages and foods. And does all the same potential damage to a child's health throughout their lives. But let's back up first to let all this sink in, since hearing that our beloved caffeine might be bad for our kids can be hard to take.

The new study examined over 50,000 women who took part in the Norwegian Mother and Child Cohort Study between 1999 and 2008. At 22 weeks, all of the women's caffeine intake was reported and then the child's growth was tracked from 6 weeks old until they were 8.

Researchers found that drinking high amounts of caffeine during pregnancy was linked to an infant's "excess" growth in the first year and then led to an increased risk of being obese as they got older. That matters, since kids who are overweight or obese are five times more likely to be obese as an adult, which can then lead to heart disease and diabetes, among other health issues, according to the Obesity Society.

The American Pregnancy Association recommends that women consume less than 200 milligrams of caffeine a day, which is about 12 ounces of coffee, or the equivalent of a Starbucks "tall" cup. But the most important takeaway from the study is that women need to remember that caffeine comes not just from obvious drinks, like coffee, black tea, or soda. Chocolate, chocolate milk, energy drinks, protein bars, and even ice cream can have a little bit of caffeine, according to Livestrong.

So if you're craving chocolate every night along with a huge mug of coffee in the morning, you might want to talk to your doctor and see what that might mean for your infant, according to this study. Eleni Papadopoulou, researcher at the Norwegian Institute of Public Health and a lead author on the study told CNN that she just hopes women will be more informed about the choices their making around caffeine and their pregnancies. She told CNN:

Women with average or high caffeine intake had a 10 to 30 percent higher risk, respectively, of having babies with excess during infancy compared to those with low caffeine intake, according to the study. By 8 years old, only the children who were exposed to high and very high levels of caffeine had an increased risk of being overweight, which could be enough for some women to reconsider their morning routine or mid-day pick-me-ups.

Of course, deciding what to give up and what to change while pregnant is a personal decision that every woman should make with her doctor. All this study really makes clear is that you should be careful about how you calculate your caffeine intake and know ahead of time that it could have an effect on your kid's weight for most of their childhood. You could always switch to decaf, right?