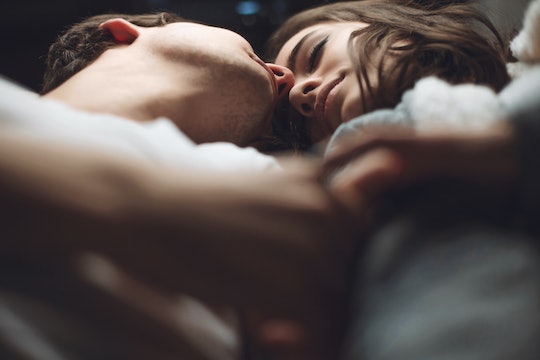 How Vaginismus Affects Sex & What You Can Do To Combat It

It's not often written about in women's magazines. It's not well known among women. It's vaginismus, and how vaginismus affects sex can be emotionally scarring. And though vaginismus has different degrees of symptoms, according to Vaginismus.com, every woman who suffers from this condition has to deal with the fact that her pubococcygeus (PC) muscle group involuntarily clamps shut when faced with penetration.

Imagine having a disconnect between your body and your sexuality so strong that you are riled with physical pain during intercourse.

Now imagine what that does to your sex life. But, there's good news here, people. A couple who can overcome vaginismus can grow stronger, and deepen feelings of intimacy. However, Vaginsmus.com noted that men in particular tend to have several feelings of helplessness when their partner is affected with this condition. These feelings typically include rejection, guilt, anger, frustration, fear, and avoidance. But, there's also room for empathy, and the chance to problem solve together.

Psychology Today recommended that a couple seek treatment together. Licensed marriage and family therapist and certified sex therapist, Stephen J. Betchen told Psychology Today that a psychodynamic approach, one that looks to seek the root of what's causing vaginismus, and incorporates behavioral sex therapy into treatment is best.

While investigating what causes vaginismus, an article in New York Magazine theorized that there can be past sexual abuse, psychological abuse, or even a traumatic first gynecological visit in the history of a woman who has this condition. Betchen recommended that the woman undergoes individual counseling in order to explore possible causes. Sometimes, the cause is unknown.

However, behavioral sex therapy is an important part of the treatment of vaginismus, and, involves both partners. Betchen said the behavioral intervention consists of women using special dilators that gradually get bigger, in order to desensitize herself to penetration. In this case, a partner's job is to provide comfort and support. He or she can even help with the insertion of the dilators when the woman is comfortable.

Although Medical News Today noted that the leading symptom of vaginismus is pain during vaginal intercourse, with treatment, vaginismus does not have to ruin your sex life. In fact, with the right partner, the right therapist, and the right lubrication, treating vaginismus can make your sex life more intimate than ever.