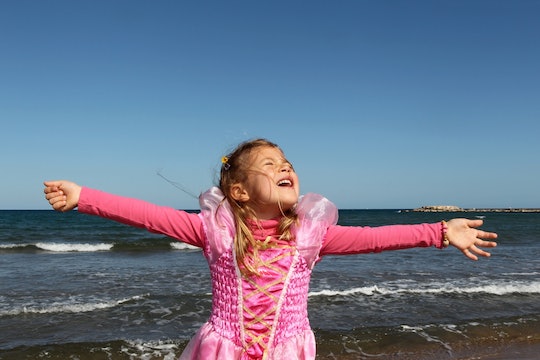 As we are progressing as a society and finding more and more science-based information on raising our children to be caring and confident adults, there has thankfully been more focus on how we are raising our girls and developing their self-esteem. But with the princess craze sticking around for the long run, what does it mean for our daughters? Is constantly wearing a princess dress affecting your toddler in some way? Whether it affects their self-esteem, or their views of gender roles, it has a lot of parents concerned to see their child constantly reaching for a princess dress.

Luckily, the general consensus from the experts I spoke with is that it’s not necessarily the wearing of the dress that affects a toddler’s brain or self-esteem, but the parenting that goes along with it. And if there are any long-lasting effects, it teaches kids to take on various social roles and develop their own ideas of societal norms, not necessarily creating confidence or self-esteem issues in girls (or boys).

Dr. Daniel Ganjian, a pediatrician at Providence Saint John’s Health Center in Santa Monica, California, tells Romper it’s important to allow your children to use their imaginations, and if they enjoy dressing up like a princess, then just allow them to be a kid. “If there is an aspect of the fairytale that you do not like, then speak to your child about it. It’s an educational opportunity,” Ganjian says. A positive way wearing princess dresses affects your toddler’s brain is that it allows the child to exercise their imagination muscle, he adds.

He also says that while it can potentially teach a child that beauty is all about dresses and looks, "...let your child know that they’re pretty because true beauty is from within." This means having “a good character — respecting others, following the rules, and focusing on how to help others (not just yourself), being other-centered and not self-centered.” Also for what it’s worth, Ganjian’s experience shows that kids like princess dresses because of “looking pretty” and actually do not care much about the prince. Score.

Dr. Rocío Bravo, a clinical psychologist and early childhood mental health specialist at Providence Saint John's Child and Family Development Center in Santa Monica, California, agrees, and tells Romper, “Play themes vary across children and are usually based on their own experiences, meaningful relationships, and sense of how the world works.”

Bravo says playing also allows children to “take on various social roles … as such it is difficult to say how certain play themes might affect children in the long run, as confidence and self-esteem may be tied to other factors, such as a child’s caregiving environment or the quality of their primary relationships. However, the more children are exposed to diverse people in various roles, the more ideas they might develop for their characters (and therefore themselves) during times of imaginative play."

Conversely, what does it mean if a girl would rather not wear princess dresses but play as a typically "masculine" character or job? Ganjian says this is definitely fine. “Let your child decide what kind of games they want to play with. Do not label certain games as being for girls and others for boys.”

“Play is how children communicate their inner thoughts and feelings, and the toys they use are their words," Bravo adds. "Limiting a child’s options during play (for example, by only providing them toys based on their gender) would only lead to their diminished ability to express themselves. A meaningful strategy that parents can implement is to encourage their children to play out the themes or narratives they are drawn to, while also supporting them to broaden their thinking through the play.”

And if your boy enjoys dressing up as a princess, too, know that it has no lasting effects, positive or negative. “It is very normal for about 3 percent of boys between 2 and 5 years old to want to wear princess dresses. It has no lasting effects — it just allows them to have fun. After a few weeks of wearing it, they often get tired and want to move onto the next toy,” Ganjian says.

But even if they wear it for weeks, just remember none of it is worth worrying about. “It is important for all children to express all aspects of their personalities, not just those that society has tied to their gender, and thus develop into a well-rounded member of our community," Bravo says. "The more children are allowed to express themselves through their play, the more their brains will grow and develop the necessary neural connections to learn and thrive."

As far as brains go, dressing up as a princess doesn't really affect a child's self-esteem and self-worth, and it doesn't necessarily teach kids that how you look is more important than anything else. Like almost everything else when it comes to our kids, it's up to the parent to use opportunities as teachable moments every day. If you feel like that's the path that dressing up as a princess is taking and you don't like it, talk to your child about it, and show her or him that what matters most is on the inside. Otherwise, enjoy this sweet, sparkly phase in life.