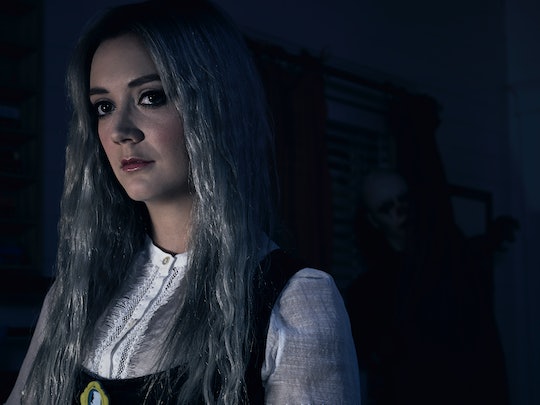 The End Of 'AHS: Cult' Could Go In Several Different Directions

I'd be lying if I said I have ever correctly predicted the end of an American Horror Story season. I'm not a genius from the AHS subreddit; I'm merely human. Each year, I've been surprised by the turns the show takes and by the end, I can't believe how wrong most of my theories are. This season doesn't seem to have the meta-twist that Roanoke had, but that doesn't mean it hasn't shocked me or other viewers. So how will AHS: Cult end? Kai may be losing his grip on the cult — but he's still going after his master plan.

The biggest twist of the season came in the last episode, "Winter of Our Discontent." This entire season, Kai and his clowns were terrorizing a woman named Ally. Ally suffered PTSD following Trump's win in the 2016 election, and Kai took it upon himself to trigger her practically on the daily (not to mention her wife, Ivy, was a member of the cult). In the last scene of the episode, though, the newest cult member was revealed: Ally. What!? Scenes earlier, Ally told Kai off and said she wasn't afraid anymore, that he didn't have that power over her. As of now, I don't know what Ally's membership of the club will bring... but I have a feeling it has to do with her son.

As Vanity Fair so eloquently put it, the show is now "officially off the rails." This was apparent to me when Kai wanted to have a threesome with Winter and Detective Samuels in order to "create a messiah." I'm not sure what Kai's going for anymore (and I doubt he does either); I thought he just wanted power, and to have control over everyone. But where does making a messiah with his sister come into play? Of course, I went to the internet for help on this one. Since the season began, some viewers have suspected that Kai is obsessed with Ally because of her son, Oz. In the premiere episode, Winter asked Oz who his biological parents are... and he had no idea. A longstanding theory is that Kai may be Oz's father, and he may want the child to carry on the cult.

Reddit user Anon33157 theorized that Kai wants to groom Oz to be the cult's future leader. Oz's full name is Ozymandius, which means "king of kings." In Percy Bysshe Shelley's poem "Ozymandius," he is portrayed as a king with no empire to rule because it's destroyed. Is that what Kai wants Oz to be: the leader of a destroyed empire (current society)? Oz and Kai will finally meet, as evidenced in the promo for the next episode, "Drink the Kool-Aid." In it, Kai asks some of his followers if he'd make the "ultimate sacrifice" for him. He's then seen distributing Kool-Aid to them, and to Oz. This is reminiscent of real cult leader Jim Jones, who made his followers drink poisonous Kool-Aid.

This is where I get stuck: does Kai want to kill his followers, who are the only source of his power? Does he want to kill Oz, who may be his son/the future cult leader? Or is this all just a test? And what about Kai's messiah baby? There are still so many questions, and with the season already winding down I hope AHS starts answering them. I also hope in the next episode, viewers find out why Ally joined the cult, and what she plans on doing with Kai; and just what is in his Kool-Aid? It's unknown now how AHS: Cult will end, but I'm sure the audience is due for some more twists before then.