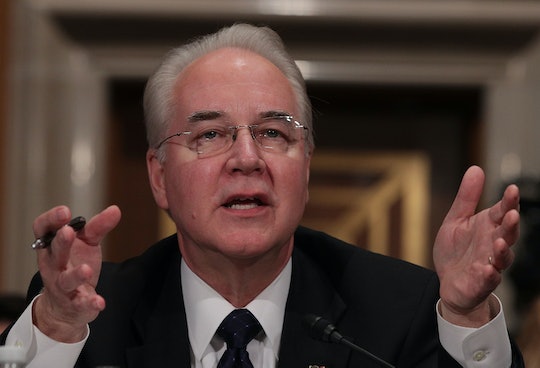 During his successful campaign during the 2016 presidential election, President-elect made a promise; he would not cut dollars from Medicaid. The government-funded program is essential to millions of Americans without health care insurance, and Trump's plan to dismantle the Affordable Care Act could see these same people relying heavily on Medicaid. As potential incoming Health and Human Services Secretary Tom Price dodges questions in the hot seat at his Senate confirmation hearing, many people are wondering how Medicaid cuts will hurt low-income families?

GOP Rep. Tom Price was grilled on Wednesday by Massachusetts Sen. Elizabeth Warren about his intentions with the Medicaid program once the Trump Administration takes over next week. Price, a retired orthopedic surgeon, has long been supportive of the Senate Republicans bid to repeal Obamacare. He was also a fan of the "Patient Empowerment Act", a thinly veiled plan that would have allowed doctors to charge higher rates than Medicaid would pay and expect the patient to make up the difference. Sen. Warren asked Price during his Senate hearing on Wednesday whether or not he would:

guarantee to this committee that you will safeguard President-elect Trump's promise, and while you are HHS Secretary, you will not use your administrative authority to carry out a single dollar of cuts to Medicare or Medicaid eligibility or benefits?

His answer is of grave importance to low-income families, as well as the children, seniors, pregnant women, and individuals with disabilities who make up the 72.3 million who rely on Medicaid for basic health care. In 2010, the Affordable Health Care Act expanded Medicaid so that nearly all low-income individuals had health care coverage, but the GOP (not to mention incoming HHS Secretary Price) is hell bent on dismantling it.

Budget cuts to Medicaid would almost certainly spell trouble for low-income families. Coverage to millions of people could either be ended or reduced dramatically, and coupling that with the end of Obamacare would see many millions of people without health benefits.

So what did Price have to say in response to Warren's pointed line of questioning about Medicaid budget cuts? He admonished the senator for using money as a metric; he felt the "metric ought to be the care the patients are receiving."

He refused to say that he would follow through with Trump's promise not to cut Medicaid spending, and continued to ramble about what he felt the correct metric should be. Warren naturally shut him down:

Frankly, the millions of Americans who rely on Medicare and Medicaid today are not going to be very reassured by your notion that you have some metric other than the dollars that they need to provide these services. You might want to print out President-elect Trump's statement saying 'I am not going to cut Medicare or Medicaid' and post that above your desk in your new office. Because Americans will be watching.

Americans will be watching, and hopefully they will be reassured that there is someone like Warren in their corner.