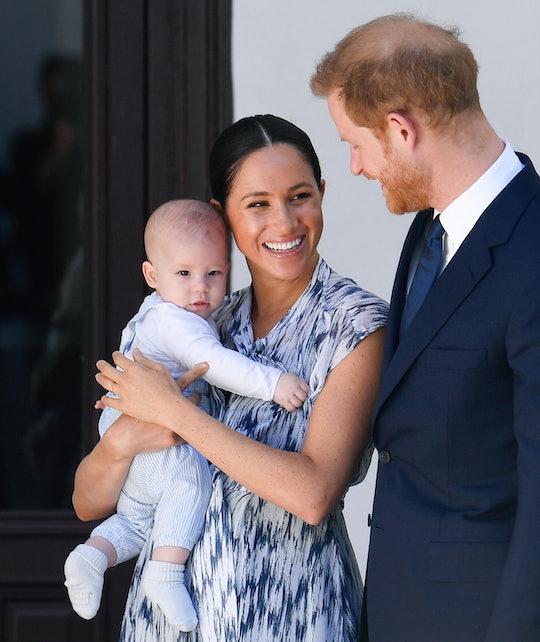 Last year, the Duke of Sussex marked his first Father's Day with a beautiful, sepia-toned photo featuring his newborn son. It was adorable, heartwarming, and just a delight to see while scrolling through Instagram. But, given how much his family's life has changed over the past year, how Prince Harry will celebrate Father's Day in 2020?

For starters, due to the ongoing coronavirus pandemic and social distancing measures, Prince Harry and Meghan Markle will most likely have a low-key celebration at their new home in Los Angeles with their 1-year-old son Archie. After all, that's how the couple reportedly spent Mother's Day last month with their son and Markle's mom, Doria Ragland, who lives nearby, according to Oprah Magazine.

Although a big backyard BBQ at Kensington Palace with all the royal dads would certainly be fun, it seems highly unlikely that Prince Harry would be able to travel the UK to spend Father's Day with his dad Prince Charles and older brother Prince William, especially considering that Los Angeles County could still be on lockdown until July, according to the Los Angeles Times.

Another reason Prince Harry's Father's Day celebrations could be low-key? As you may recall, the Duke and Duchess of Sussex announced earlier this year that they'd be stepping back from their senior royal roles in an effort to live a "more peaceful life." "... I hope it helps you understand what it had to come to, that I would step my family back from all I have ever known, to take a step forward into what I hope can be a more peaceful life," Prince Harry said in January.

When Prince Harry and Markle officially stepped back from their royal duties, they also stopped using their official Instagram account, @SussexRoyal. So if Prince Harry does decide to share a sweet tribute to fatherhood on social media this year, it's hard to say where that would be posted. Last year, the couple celebrated Father's Day with a photo on Instagram. "Happy Father’s Day! And wishing a very special first Father’s Day to The Duke of Sussex!" the caption on a photo of newborn Archie clutching onto his dad's finger read.

The royal family typically tends to spend family-centric holidays, like Father's Day, with family in private, according to Hello! Magazine. So while celebrating Father's Day during a pandemic might not be ideal, a low-key day at home with his adorable son and wife doesn't sound too bad.