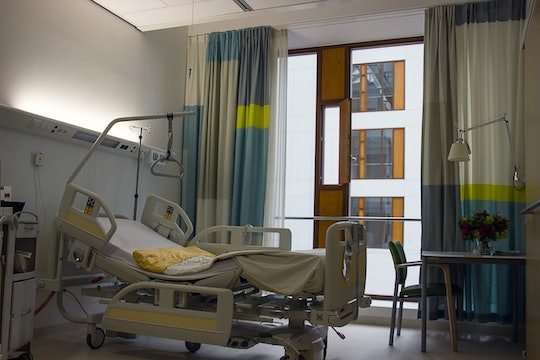 The Negative Effects Of Trumpcare On Children's Hospitals

Although there's no date for the Senate to vote on its version of the American Health Care Act yet, different sectors of the health care industry are already starting to prepare for the eventual effects. According to a handful of recent reports, children's hospitals should be the most worried about the proposed funding cuts under the version of the bill passed in the House of Representatives earlier this month. If passed in the Senate, Trumpcare would affect children's hospitals disproportionately, via the proposed funding cuts to Medicaid and CHIP (Children's Health Insurance Program).

The version of the AHCA that passed in the House (the Senate is currently working on its own version of the bill) would rollback the expansion of Medicaid in the 31 states that took advantage of it under the Affordable Care Act. But the AHCA will cut more than $800 billion from state Medicaid budgets, meaning that the 35.9 million children enrolled in Medicaid and CHIP programs could theoretically lose their coverage if the AHCA is rolled out in its current form.

According to a recent report by The Chartis Group, more than half of children's hospitals patients are insured by Medicaid and "it is nearly certain that a meaningful reduction in Medicaid funding will reduce access, coverage and payments for children’s service." Although GOP leaders have been making the rounds in the media saying that the cuts will benefit patients or that healthy people shouldn't have to pay for unhealthy ones, those Medicaid cuts will affect children the most.

All of this means that children's hospitals, especially not for profit children's hospitals, will have to reevaluate their models if they want to continue to provide a high level of care for children. If the hospital used to get reimbursed for caring for children in Medicaid and CHIP programs, it could mean turning away patients without coverage under Trumpcare. Or it could mean changing their profit model to cover the difference.

According to a recent report by Fitch Ratings, the version of the AHCA that passed in the house earlier this month would put children's hospitals in some major financial trouble. Emily Wadhwani, the director of the credit rating agency said in a statement:

Children's hospitals' high exposure to Medicaid and supplemental funding, and their inherent vulnerability to governmental funding cuts, constitutes the primary credit concern for this sub-sector of the industry. Proposed reductions to Medicaid and other supplemental healthcare funding cuts currently contemplated in Congress are likely to pressure these hospital providers over the longer term if enacted.

If hospitals are cash strapped, or are forced to shut their doors, children who need care will be the first ones to feel the effects. Even the Children's Hospital Association released a statement warning lawmakers that the AHCA, in its current state, or any repeal of the ACA's Medicaid expansion is bad for children's hospitals especially.

In short, if Trumpcare passes, children's hospitals will need all the support they can get, but hopefully it doesn't come to that.