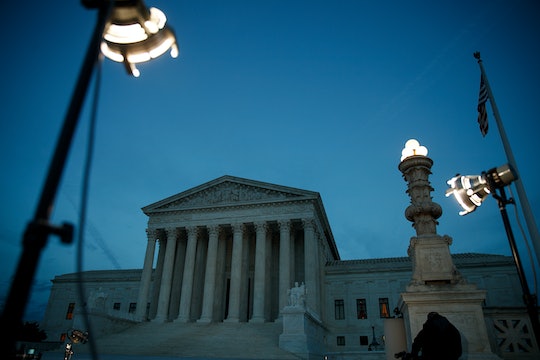 President Trump announced his nominee for the vacant Supreme Court seat on Tuesday, and despite all of his subterfuge, it came as no surprise to anyone. Denver Circuit Court Judge Neil Gorsuch had been called to Washington ahead of the announcement, which was shared on Facebook Live, and was considered the odds-on favorite to win that final rose. Now that the choice has been made, the questions have started bubbling to the surface. How will Neil Gorsuch's nomination affect parents, for instance?

Gorsuch, a 49-year-old appellate court judge from Colorado, is officially the youngest Supreme Court nominee ever. He could potentially affect the way laws are made for the next 30 to 40 years, since a seat on the Supreme Court is a lifelong career. Trump certainly expressed enthusiastic (though decidedly brief, considering his usual penchant for pontificating) support for Gorsuch, referring to him as "the very best judge in the country for the Supreme Court." He certainly has the pedigree to sit on the Supreme Court; He studied law at Columbia and Harvard, and received a doctorate on legal philosophy from Oxford University. Trump touted his resume as "beyond dispute" on Tuesday adding,

I only hope that Democrats and Republicans can come together for one, for the good of the country.

Considering the plans of Senate Democrats to filibuster any nomination of President Trump for what they consider a "stolen seat" on the Supreme Court (Republicans refused to consider former President Obama's nominee, Judge Merrick Garland, for 10 months until his confirmation eventually expired), the two parties coming together behind Judge Gorsuch seems unlikely.

Conservative Gorsuch was a big fan of former right-leaning Justice Antonin Scalia, calling him a "lion of the law" in his speech accepting his nomination to the Supreme Court. Political pundits expect Gorsuch to follow in the right-leaning Scalia's footsteps, which could spell a few issues for parents.

For one thing, Gorsuch sided with a Utah judge in 2015 in an attempt to defund Planned Parenthood, which provides accessible health care. He also supported the claim of Hobby Lobby when that company didn't want to provide contraceptive care for their employees through the Affordable Care Act, taking their religious belief into account over the rights of the employees. And while he might not have ruled in any abortion cases, he has made his feelings on the subject relatively clear. In his book, The Future of Assisted Suicide and Euthanasia, he wrote:

... All human beings are intrinsically valuable and the intentional taking of human life by private persons is always wrong.

Gorsuch is a strong believer in originalism, meaning he reads the Constitution as it was originally written, not in a way that makes sense for a modern world. Which sounds great in theory... but the world has changed significantly in the past 200 years. It's going to continue changing with our children, and our children's children. And if Judge Gorsuch can't accept that... what will that mean for the next generation?