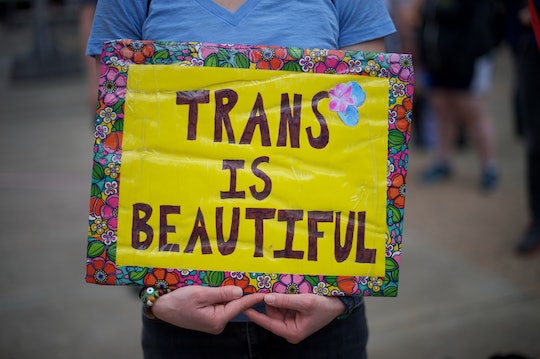 In an effort to draw attention to LGBTQ protections, Democrats are looking to re-introduce the Equality Act in Congress. They're facing a very conservative majority, but that's sort of the point. Democrats think that by introducing the bill, they can show Americans exactly which representatives and senators are anti-LGBTQ equality. But it's more than mere political theater because the Equality Act will directly protect transgender kids, which is something that everyone should theoretically get behind.

During the 2016 election, Hillary Clinton ran on a platform promising Americans that she would pass the Equality Act, calling it her "highest priority." Since the Trump administration has taken office, the LGBTQ community has had some setbacks since the inauguration and the Equality Act, or what Clinton called America's "great unfinished business," seems more unattainable than in recent history.

Late last month, the Justice Department rolled back protections for transgender students that the Obama administration put in place — essentially using Title IX to do exactly what the Equality Act would do in making discrimination based on gender identity or sexual orientation illegal.

If Democrats are able to at least get Republicans to hold a hearing on the Equality Act this time around, it would be a big step politically, in addition to providing protections for an entire American community. The Democrats hope is that that bill, which has hope is that conservative legislators reveal their true feelings about the LGBTQ community. The 2018 mid-term elections seem very far away, but publicly battling over human and civil rights might not be a good look on some lawmakers, depending on their constituents.

Cicilline said, "If Republicans in Washington want to keep standing in the doorway of opportunity, they’ll have to answer to their constituents in just two short years.” Although there are currently no co-sponsors for the bill in the House or Senate, Cicilline also added that he thinks it's possible to get Republicans to get on the right side of history. There are still 30 states that don't have LGBTQ specific protections against discrimination and those that do often don't include gender identity and the passing of the act could impact how millions of Americans go about their day. In some districts and states, not acknowledging that LGBTQ rights are human rights could be politically dangerous.

This might be the perfect time for Americans and legislators to push the GOP into protecting the LGBTQ community — and especially transgender children — once and for all.