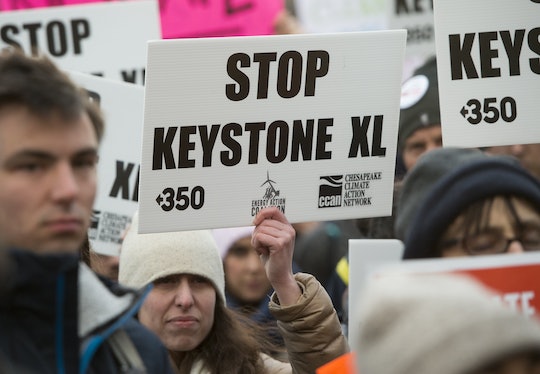 How Keystone XL Would Affect The Environment

President Donald Trump has made it clear in the past that he is a climate change skeptic. Case in point: that time he blamed China for creating the global warming “hoax” as an elaborate ruse to mess with American business on Twitter. Before he became the president, back when he was just a man with a seriously itchy Twitter finger, it was cause for slight concern and maybe a little derision. Now that he is President of the United States, Trump’s open disdain for environmental protection is dangerous. For instance, consider the effect the Keystone XL pipeline will have on the environment.

President Trump signed an executive order on Tuesday resurrecting the proposed pipeline, the very same one former President Obama halted in 2015 in an effort to preserve the environment. Trump's plan is to reinstate both the Keystone XL and Dakota Access Pipelines, despite years of protests by Native American and environmentalist groups. Not only does Trump intend to revive both pipelines in an effort to create more jobs, he also said that he wants United States Army Corps engineers to "expedite" the environmental reviews because he believes "The regulatory process in this country has become a tangled-up mess."

Of course, those environmental reviews have been put into place for a reason; the proposed 1,179 mile Keystone XL pipeline that would run from Alberta, Canada, to Nebraska was already denied by the Obama administration for environmental concerns. The pipeline would carry oil from Alberta's oil sands, and the oil produced there is believed to create 17 percent more emissions than regular oil, according to a report by the Environmental Protection Agency. The EPA also found that the pipeline would add 27 million tons of carbon dioxide equivalents into the air.

The issue isn't only an environmental one; there is also the question of eminent domain. Many landowners in the state of Nebraska have been opposed to the pipeline even before a specific route has been outlined by the state's regulators. Once the route has been mapped out, which water supplies could possibly be tainted? How many homes could be torn down to make way for the pipeline, or communities destroyed?

None of these seem to be of great concern to President Trump (who, it's important to note, previously invested in Energy Transfer Partners, the company building the Dakota Access pipeline). He has invited Trans Canada, the makers of the Keystone XL pipeline, to resubmit a proposal with an addendum: The pipes must be made in America. So... that's something, I suppose. Fortunately, there are still people in Washington willing to fight for the environment. Democratic Sen. Brian Shatz from Hawaii released a statement about Trump's renewed interest in the Keystone XL pipeline, saying:

While countries like China and Germany continue to make progress in their transition away from the dirty energy of the past, this action will roll back the progress we have made. Encouraging the production of this oil, which includes Canadian tar sands — one of the dirtiest fuels in the world — is a huge step backward.