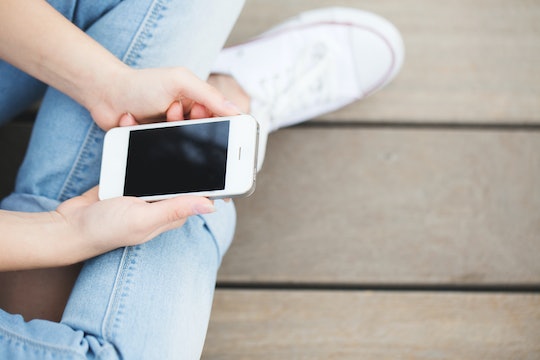 How Your Kid Is *Actually* Using WhatsApp, According To A Social Media Expert

I'll admit, until I took a language class with a group of undergraduates a few years ago, I had no idea what a WhatsApp was, or why I should download it to my phone. I needed it explained to me like a 2-year-old, messaging luddite I apparently was. It turned out to be a very convenient and cheap way to connect with the other students for studying and questions. As a mother, you're likely worried about the possible implications of such easy communications, and knowing how your kid is actually using WhatsApp is as important as how they use any social media.

WhatsApp isn't new. It's been around for nearly eight years, and in that time has ballooned to over 1 billion users worldwide since January of 2010. It's a cultural juggernaut that combines the ease of texting, the savvy design of social media, and the frugality of wifi. Kids are using it much in the same way they use text messaging and Snapchat, but because of its inexpensive nature and speed, it's frequently given primacy over the others as their chosen method of communication. An estimated 55 billion messages are sent via the phone-only application each day, dwarfing Snapchat's mere 400 million messages sent per day.

I spoke to social media safety expert, Marcus Roosevelt, about how your kids are really using WhatsApp, and he tells Romper that kids are using it just how they would use any other messaging app. "It's faster and the group chat feature is easier to use than if it was in your standard messaging app. The .gif feature is easy to use and extremely customizable, making it desirable for the .gif generation." He notes that the minimum user age designated by WhatsApp is 13, but that is easy to get around. "Anyone with a phone and number can use it. It isn't on iPad or tablet — you must have a number to verify your account. However, not everyone who has a phone and a number is 13, as we all know."

Roosevelt says that there are dangers to using WhatsApp, just like any other program on the phone. "While social media applications like Facebook and Instagram filter out most adult content, there is no such feature on WhatsApp, and the lack of regulation on age means that anyone who can get your child's number can send them anything." Roosevelt says you may never know it, either. "The conversations are easily deleted, and there are account management techniques that can hide their login history, make them appear invisible, and stop files from being saved automatically."

He says the best way to keep your child safe and using media respectfully is to have an open dialogue with your child, explaining to them the possible risks and dangers of using such an app, and letting them know you're monitoring their use. "Even if you're not consistently snooping, you have to look occasionally, if only so that your children know that you will look." Roosevelt says to lay out strict rules about how and when it can be used, and how to protect themselves online by not sending inappropriate content or giving out their number to people they don't know personally, or with whom they'd rather not communicate."

The bottom line is that while WhatsApp isn't that different from traditional SMS messaging, it's used a bit more cannily than that and that can be dangerous. While WhatsApp goes to great lengths to explain that they don't store your data or number, one screenshot by a fellow user could change the course of your child's life if they misuse the app. It's important to stress this fact with your child before they're even given a phone with messaging properties, and to implore them to use good habits. Personally, I plan on threatening my children with a jitterbug phone if their habits go awry. I think that should serve as a very good threat. "Look, you can have a phone which you can see the buttons from space and it does precisely one thing: calls me."