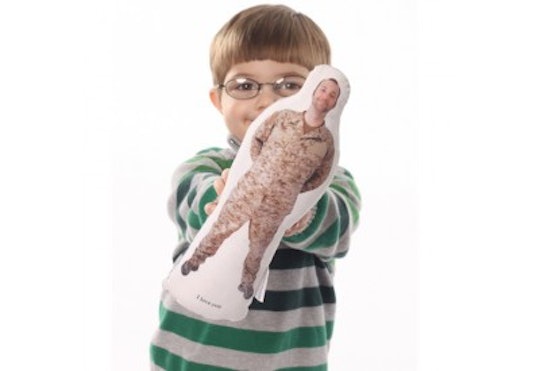 For parents as well as kids, getting in those bedtime cuddles can be the best part of the day. But for children whose parents are active duty deployed military, those snuggles can sadly be few and far between. But one company's “Hug-A-Hero” doll program is trying to make sure kids get in the hugs they need.

Dyal Studio launched its “Hug-A-Hero” doll program in an attempt to help children whose parents have been recently deployed. The photo and design studio in Jacksonville, NC found that many children missed their moms and dads and having a doll to hug made them feel better. The plush dolls have a picture of the child’s deployed parent on it.

At first, the company was donating a doll a week as part of a 12-week drawing. But the interest soon increased, and owners Tricia Dyal and her husband, a retired Marine, found that they couldn’t keep up with the demand. Currently, the studio has over 500 requests, the Charlotte Observer reported.

The Dyals are certainly no stranger to the deployed doll biz. In fact, Dyal launched her company, Daddy Dolls, 15 years ago with a friend. Her great aunt had made a doll similar to the Hug-A-Hero dolls that helped her daughter when Dyal’s husband was deployed.

The original intent was to distribute dolls in the Jacksonville area, after many North Carolina troops had been deployed. But Dyal now sees that the need is much larger than originally intended. “We definitely want to help more than just Camp Lejeune families,” Dyal told the Charlotte Observer. “It’s worldwide thing.”

So if you think that your deployed partner is already a doll, you can make them into a real one for your child. You can purchase one through the company’s website ($25). "Big Daddies," which are over 3 feet tall, are also available ($69). All you’ll need is a clear, well-lit photo of the person (full-length shots are best). And as the site advises, mommy or daddy should be dressed in clothing that your child feels comfortable seeing you in. Or if you don't know a kid personally who can benefit, you can sponsor a child (also for $25).

As for Dyal, she has plans to partner up with the USO or the Red Cross to help distribute the dolls. That way, military kids can hug their heroes every night — that is, until the real ones return home.