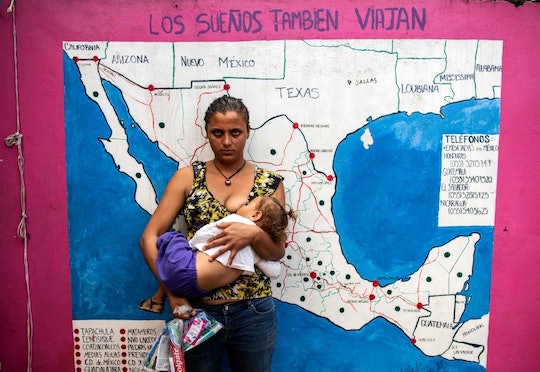 You Can't "Humanize" Someone You Don't See As A Person

By now most of us have probably seen the devastating photograph of Óscar Albert Martínez Ramirez and his toddler daughter, Valeria, shared by someone telling you, "We must do something!" The impulse to use these images to stir people into action is understandable, but it is completely ineffective. Here’s why: The death and destruction of human bodies does not count when those bodies belonged to people of color.

There is an old black and white photograph from the Civil Rights era of Black men holding signs that read, "I Am A Man." Sixty years later, people of color find themselves still needing to assert their humanity in the face of global political regression. Writers are responding to the image of Martínez Ramirez and his daughter with the call to humanize them beyond that painful final image, and are instead showing images of them while alive, with back stories of the immensity of their poverty and the conditions that lead them to that final act of crossing the Rio Grande. The gap between the intention of this effort and the impact it has is that, alive or dead, Martínez Ramirez and his daughter were already dehumanized in the eyes of many Americans, including White Conservative Christians and your well-meaning liberal friends, by virtue of their skin color and nationality. No amount of bringing context to the lives of those who have perished will create empathy for a class of people already deemed inferior by the very people they are beseeching compassion from.

While some may empathize with the subject in tragic photos, others will simply see the subjects' fates as the consequences for their transgressions.

Let us not forget that the United States of America has a long and sordid history of publishing photographs and even creating postcards of Black bodies swaying underneath the Hanging Trees. Let us not forget the "picnics" at the base of those trees, with White children laughing and playing amongst bulging eyes and swollen tongues hanging from forever-silenced mouths. While some may empathize with the subject in tragic photos, others will simply see the subjects' fates as the consequences for their transgressions. Had they simply obeyed the rules their fates would've been different. Still others will see the images as a consequence for being people of color — intensely grateful that such is not their lot in life.

What, then, is the point of using shocking images to elicit calls to action when those images no longer shock?

Growing nationalism and native populism makes the seemingly difficult job of human empathy almost impossible for some, but let us not fool ourselves into thinking this is something new. An "us vs. them" way of seeing the world has been in place since before the Neolithic age, and was of distinct value then. Clannishness ensured the survival of the tribe, and often kept members from harm, but just like most societies outgrew loincloths, we must also outgrow the outdated perspective of division. Disparate cultures, religions, and languages can be celebrated and affirmed without competing for superiority, but not if the "ruling class" sees that celebration as reducing their own importance.

To far too many White Christian conservatives, human rights are like pie, and more rights for others means less rights for them. There is no amount of shocking images that will get people of that mindset to relinquish their "us vs. them" world view. For them, there is no humanizing the "other."

There have been a number of recent articles which tell us that refugee and migrant numbers will continue to steadily climb due to climate change killing crops, drying up water reserves, and causing political strife as the powers that be in those countries hoard the ever-dwindling resources for themselves. Most, if not all, of those numbers will be people of color. These waves of humans seeking asylum will soon become a tsunami. Without seeing these victims of climate change, brutal militaristic regimes, and gang wars as actual human beings in need of assistance, photos like the one of Martínez Ramirez and his daughter will become so commonplace that there will be no emotion to elicit. Everyone will be numb to them. It will be just another day. Nothing to see here. On to the next story. Insert shrug.

There will be no image so shocking, so horrific, so mind-altering as to change the perspectives of people who revel in the cruelty of the demise of others.

For most people of color, the need to assert one’s humanity has grown wearisome. The realization that no matter the extent to which we showcase the breadth of our humanness, people of color will always be second- and even third-class citizens weighs heavily on our collective spirit. There will be no image so shocking, so horrific, so mind-altering as to change the perspectives of people who revel in the cruelty of the demise of others. There will be no final act that is so transformative as to crack open the mindset of someone who has already decided that people of color are less-than. We must stop thinking that the success of humanity as a whole lies in the conversion of racist nationalists.

Now is the time to think critically of ways in which those who do not need a heartbreaking image of a toddler clinging to her father in death to feel empathy can gather together in earnest to change the current tide.

Now is the time to save ourselves, our planet, and each other.

Only a deep sense of empathy for the "other" will enable us to do so.