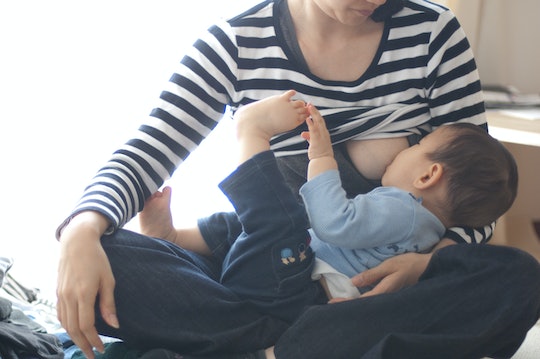 Breastfeeding is a challenge. Moms know this, of course, and most dads do too, which is why a viral Reddit post about a husband who hid baby formula from his wife after she stopped breastfeeding after some painful biting incidents has the internet fuming.

Reddit user u/PrimaryCartoonist9 recently shared her experience on the popular sub-Reddit "Am I The A**hole" to ask whether or not she was an a**hole for "not breastfeeding my baby when she bites." The mom explained that her 10-month-old daughter has been biting her so hard when she breastfeeds that her "breasts kind of look like a war zone." She wrote, "I'm bleeding and sore because of the biting and simply cannot take it anymore."

The mom shared that she has begun to pump breast milk for her baby, but also found that quite painful "until I let my breasts heal" and decided to supplement with formula instead. And, apparently, her husband was not a fan. "My husband does not like this," she wrote on Reddit. "He was okay with me pumping and feeding our daughter until I started supplementing with formula. He believes that breastmilk is best and formula is the devil because it's not 'natural' or something."

So what did he do? As the frustrated mom wrote on Reddit, "the tipping point yesterday when he hid the formula so I'd have 'no choice' but to breastfeed our daughter."

Whatever the reason for biting, the internet seems to mostly agree that it is up to this mother to decide if she wants to continue breastfeeding, not her husband. One person on Twitter noted the husband is the only person in this situation not affected by hiding the formula. "Men do not get to dictate what women do with their bodies full stop," the Twitter user commented. "A fed baby is best and him hiding food says more about him than it does about [original poster]. he would let his daughter go hungry or cause his wife to endure pain and none of it effects him."

Another chimed in, "Well when he starts producing breast milk he can supplement, until then, as long as baby is fed and thriving, you're fine."

One parent wrote on Reddit that hiding the formula can actually be dangerous in some cases. "My daughter had a very bad and undiagnosed tongue tie in her first month," they wrote. "She could have died from malnutrition if I decided to hide the formula, because she just couldn't latch onto breasts as easily."

Ultimately the internet confirmed this mother is definitely in the right. Whether her husband agreed with her decision to stop breastfeeding to avoid pain, hiding formula and trying to enforce his own rules about what sort of mother he thinks she should be is not OK.