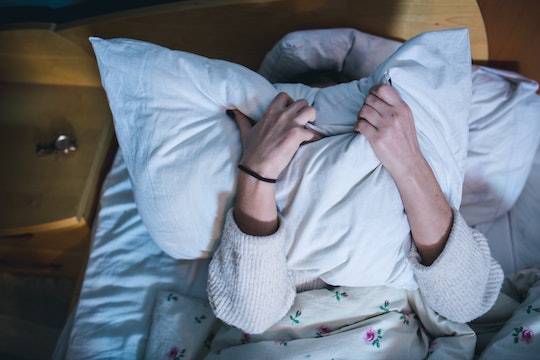 One of the most difficult aspects of parenting is, without a doubt, the lack of sleep. There are plenty of challenges, but exhaustion pretty much beats the rest of them, which might be why the internet has so many feelings about this husband complaining about his wife taking afternoon naps so she can get some uninterrupted sleep throughout the day.

In a recent post on the popular sub-Reddit group Am I The A**hole, Reddit user u/theroomum shared that she and her husband of five years share a 4-year-old daughter and a 3-month-old son, who "has a health condition and needs to be fed every 40 to 80 minutes," including at night. As such, the mom, who wakes up at night to feed their son and works from home with her own schedule, explained that she usually takes a three-hour nap in the afternoon while her husband cares for the children in the daytime so he can sleep through the night. According to the Reddit user, her husband works from 6 a.m. to 3 p.m., so she naps from 3:30 p.m. to 7 p.m.

"I drop our daughter off at kindie in the morning and then work and look after our son. I obviously don't get much sleep during the night," she wrote. "... I made it clear that I am not to be woken up unless it's an emergency... I don't actually sleep at night due to the feeding pattern. My nap is the only sleep I get."

While trading off sleep schedules didn't appear to be an issue before, her husband has apparently "started complaining recently" about their arrangement. "He doesn't think I should sleep in the afternoon because during that time childcare is on him completely," she wrote. "He wants some time to relax when he gets home. But the [thing] is, I need a few hours of uninterrupted sleep too otherwise I'll go crazy."

Sleep deprivation is a very real health concern with serious side effects; according to the Centers for Disease Control and Prevention, lack of sleep could lead to poor mental health, an increased risk for diabetes, high blood pressure, and more. So when this woman wrote that her husband "isn't happy" that she wants some uninterrupted sleep, the internet had some feelings about it.

"Offer him to swap the shifts: you get your night sleep, and he can nap if he comes home from work. Let's see how he likes that," one Reddit user commented on the post.

"What does he call sleeping all night while she wake up hourly to feed the baby?" one person commented on Twitter. "Because it sounds like 'relaxing time to himself' to me. Tell him to start feeding the baby at night & you'll stop taking naps." Another said, "Tough sh*t he's a parent too!"

"You're waking up EVERY HOUR through the night?? You need at least 3 hours uninterrupted sleep for your body to function. You only gave birth three months ago! Your husband is being selfish," one more commented on the Reddit post.

The general consensus? While some pointed out there are two sides to every story, Twitter and Reddit seem to agree that this tired mom was overwhelmingly not the a**hole. Sleep is important no matter who you are, but perhaps especially for new parents. Supporting each other is really the only way to survive those early years of parenting. That and uninterrupted sleep now and then.