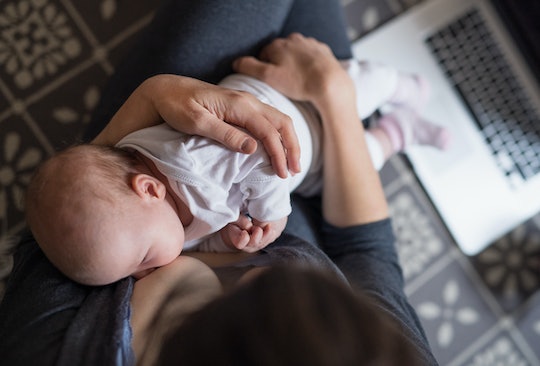 Husband Wants His Wife, Who Gave Birth 7 Months Ago, To Stop Dressing "Like A Mom"

Show of hands for the moms out there: Who loved getting dressed up after giving birth? How about during a pandemic? It would be pretty great to get a firm idea of those numbers for one husband who recently took to the popular sub-Reddit group Am I The A**hole to share that he wants his wife to stop dressing "like a mom" and not so "frumpy."

In the post, Reddit user u/Unlikely-March-3201 shared that he thought his wife's change in style would be temporary following the birth of their daughter seven months ago. "Since she gave birth back in February, the way she dresses is completely different," he wrote. "At first I thought she was just trying to be comfortable post-birth, but now that almost seven months have passed it seems like this change is permanent."

He went on to say while he still thinks his wife is "sexy," the new mom "just doesn't dress sexy anymore" and her clothes nowadays are "looser." "Think lots of sweatshirts, sweatpants, and tent dresses," he wrote. "Plus they cover a lot more whereas in the past she loved to tease me to get a reaction. The same is true for her underwear. Bras and panties that aren't that nice compared to what she previously wore."

Now he was quick to point out that he believes it's "unreasonable" to expect his wife to dress sexy for him every day, so he approached her to see if she would be willing to dress up for him a few days a week. And it did not go well. "She took it as me saying I am not attracted to her anymore," he wrote. "She also said that how she dresses is none of my business and if I can't be supportive not to say anything at all."

Not only was his wife less than impressed by his request, social media users weren't terribly quick to back him up either. Especially during a pandemic, as one social media user pointed out. "Add the pandemic. All of this chaos and nearly every female I know is talking about her yoga pants, day pjs vs night pjs, etc etc," they commented. "Add just having a baby and who wants to dress sexy a 'few days a week?'"

One mom commented on his post, "You do realize she had a baby recently and it can take awhile before she feels herself again? It took me a year after both of my kids were born. My priority was not on me."

"Se brought your child into the world, and you’re not turned on by her clothes?" one more chimed in. "She should dress in whatever she feels comfortable in, and if that is granny panties, then you need to suck it up and accept that."

Another tweeted that there could be some underlying issues this husband doesn't understand: "BTW, if you MUST do this, the way to ask is, 'I'm worried about you, sweetie. You used to take so much delight in dressing stylishly, and now you're always in sweat pants. You've lost something you took joy in, and now I'm scared that you're depressed and not telling me.'"

Still, there were a few people who thought the husband had a point. One social media user wrote on Twitter, "I’d say NAH only cause it’s not unreasonable to want your other half to occasionally make effort. But it’s a sensitive subject and you should be considerate when she’s recently (yes 7 months is recent) had a baby. Take a diplomatic approach."

Giving birth is difficult enough without the added pressure of welcoming a baby during the pandemic. Between the changing body, the lack of sleep, and all of that extra time at home, it makes sense if this new mom wants to hang out in sweats more often. And it sounds like she's in good company.