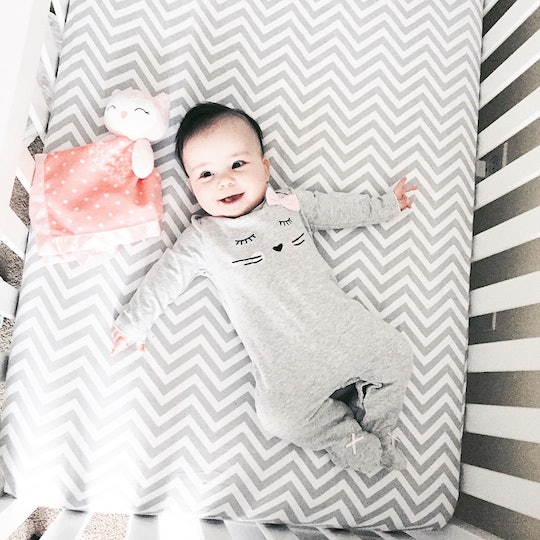 When it comes to being a new parent, one of the most challenging, frustrating, and straight-up mysterious issues is definitely a baby’s sleep habits. Before I gave birth to my daughter, I had the naive misconception that she would simply sleep when she was sleepy. Of course, I anticipated that the first few weeks would be a chaotic mess of sleep deprivation, but I assumed that once we created a routine, I’d be able to lay her down in her crib for a nap, and she’d drift off to dreamland after a couple of lullabies.

This is the part where all veteran moms get to laugh at me, as, naturally, that is not how it turned out. The first few weeks were chaotic, and just when things seemed to settle into something resembling a pattern, my daughter’s 4-month sleep regression hit. Everything that I had been doing previously no longer worked, and it felt like we had to start from scratch.

In many states of exhaustion, I often turned to the internet for solace. Sometimes I read message boards for other parents’ tips and tricks (of course nothing worked because every baby is different), but other times, I browsed Amazon for products that promised to help my baby sleep. And there was certainly an endless amount to choose from.

It’s no surprise that the infant sleep industry is worth more than $325 million a year, according to the Juvenile Products Manufacturers Association, and I’m a perfect example of why. Parents, in their sleep-deprived hazes, will happily pay a lot of money for anything that promises a few extra hours of sleep, or even the whole night long. And it’s not just parents of newborns that get sucked into purchasing a $50 swaddle in the middle of the night — babies go through a handful of sleep regressions throughout their first year, and their sleep behaviors are constantly changing. Meaning that once you have one pattern under control, it disappears and a new one forms. Sleep, therefore, is a constantly moving target.

Luckily, I’ve gotten to a somewhat stable place with my now 5-month-old. She usually naps around four times a day, and she sleeps about 11 hours at night with one or two feeds. Of course, this phase is only temporary — like all the others before it — and the road to my present existence has been paved with a lot of sleep products that cost a lot of money. So here we go. Here’s exactly how much I spent on baby sleep items, from when I was pregnant until now.

Before my daughter was born, we decked out her nursery with a convertible crib from Babies R Us. She’s not sleeping in it yet, but once we start sleep training her — which will bring another setback I’m sure — she will be.

In addition to her crib, she has a mattress, mattress pad, and several fitted sheets. Let’s be real, it’s probably going to be another few months before she even uses her crib because she’s gotten pretty used to sleeping right next to us.

During our pre-baby Target runs, we bought a bunch of muslin swaddle blankets. Want to know how many times she’s been swaddled in them? Zero. She kicked out of them on the first night and we gave up immediately.

After we discovered that our baby broke out of her swaddle blankets like Houdini, we invested in a lot of different swaddle sacks. These were actually a lifesaver. We started her in the SwaddleMe Pod, which was basically just a zip-up sack that still allowed her arms and legs to wiggle around a bit. We also purchased several Halo Sleepsacks, SwaddleMe Swaddle, and Zen Swaddle (which is my favorite of all swaddles, hands down).

In an ideal world, our baby would have slept in the Halo Bassinest for the first six months of her life, but she had other plans for us. She just did not like this thing for one reason or another. After a lot of tear-filled nights, we finally let our tiny dictator win, and now that expensive fancy bassinet is taking up space in our living room where she sometimes plays in it.

Did I mention we have a tiny dictator living with us? In a state of exhaustion from her not sleeping in the bassinet, I ordered the DockATot (after hearing a zillion moms rave about how much they love it). This product is a "multi-functional lounging, playing, chilling, resting and snuggling dock" according to the website — that is, it is a product that parents expressly use for sleep that is not an approved sleep product, nor deemed "safe" for sleep. That said, it was probably our best sleep purchase to date, and my daughter went from sleeping three to four hours at a time to seven to eight hours at a time immediately. Yep, I drank the DockATot kool-aid and I’m officially a believer.

In probably my biggest moment of weakness during my daughter’s four-month regression, I purchased a couple of guides from Lauren @ Sleep and the City. My baby was only sleeping like 45 minutes at a time for naps and it was taking almost that long to get her down, and I was ready to tear my hair out. After a particularly difficult session of rocking and shushing and rocking and shushing that lasted over an hour, I sat down at my computer and literally threw money at the screen. Luckily, her advice was pretty helpful, although I still cringe at the super-impulsive purchase made entirely out of frustration.

There you have it, folks. That’s why the baby sleep industry is killing it — because people like me are desperate — so, so desperate — for a night’s sleep. And, truth be told, the age of social media has made it all worse. We see our friends on Facebook, whose babies are sleeping through the night, or we see mom bloggers whose newborns are peacefully relaxing in their bassinets, and we wonder: Why isn’t my baby doing this?

The truth is that all babies are different, and what works for one baby won’t necessarily work for the next. Additionally, sometimes babies just don’t sleep. Sometimes you can utilize all the rocking, shushing, and comforting in the world and they still won’t close their eyes and drift off to dreamland. What I’m slowly learning is that this does’t make me a bad mother. It makes me a normal mother. And ultimately, this too shall pass. One day there won’t be sleepless nights, and all of this will feel like a hazy (and quite expensive) dream. We’ll all get there, eventually.

More Like This
Even If Your Baby Sleeps Better in Your Bed, It’s Still Not Recommended
What To Do If Your Toddler Keeps Taking Off Their Diaper At Night
When Does A Baby Recognize Their Father? A Pediatrician Explains
The Best Dressed Parents At The 2023 Grammy Awards
What Parents Are Talking About — Delivered Straight To Your Inbox