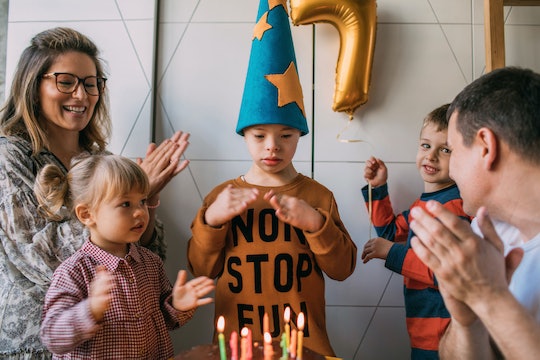 Attention: I Am Canceling The Goody-Bag Hate

There are so many things about childhood I love. The bike helmets perched on kids' heads, bobbling slightly as they try to maneuver down the driveway on their balance bikes. The way their skin smells after an entire afternoon running under the sprinkler in the backyard. Soft, cotton pajama-clad bodies against my own, a Dr. Seuss book banging me as they insist on turning the pages. It's all so fleeting, a brief point in their sweet lives, and I try to savor every second, which is why I simply can't go for the birthday party goody bag hate — I'm tired of you Scrooges fighting against something so joyful and pure.

Look, nobody spends their week wishing to spend Saturday afternoon at a warehouse full of bouncy castles, dodging kids jacked up on buttercream frosting, their mouths all different shades of the rainbow. But do you remember what it was like to go to a birthday party as a kid? The anticipation? The nervousness as you walked in, holding a wrapped present for your friend, meeting new kids and trying to find your place in the birthday cake lineup? (Was this anxiety-inducing to only me? Of course you want to be right next to the birthday kid, but then you realize the birthday kid has all these other friends that also want to be near them and AH PANIC.)

It's a tiny souvenir, a reminder that you have a friend, a tiny part of childhood that can't really be replaced.

And do you remember the thrill of a cellophane bag being thrust in your hand at the end of the party? Opening it like it's Halloween night and you're digging through your plastic pumpkin to get a look at your spoils? It always happens in the car seat, mere seconds after you've pulled away from the party, and it's one of the ultimate kid joys. A brand new sparkly pencil! A tiny tub of Play-Doh in the same color as the party decor! Organic fruit gummies from Whole Foods or no-name chewy butterscotch from the giant bulk bag you can buy at Dollar Tree! It's all just a big bag of excitement.

Because of course it really doesn't matter what's inside. It could be filled with gold chocolate coins to pay homage to the pirate party you just left, or it could be a bag full of tiny plastic favors that come in a six-pack from Party City. (You know the ones — those tiny, impossible games where you have to move a little ball through a maze.) The point of the goody bag is this: your friend invited you to their birthday party, the ultimate celebration for any little kid, and then they gave you a goody bag as a thank-you. It's a tiny souvenir, a reminder that you have a friend, a tiny part of childhood that can't really be replaced.

It's absolutely OK for you to stay up until midnight the eve before your child's third birthday party stuffing goody bags full of blue jellybeans and Goldfish snacks for a Finding Dory-themed party.

What's there to hate about them? The general consensus seems to be that they're either full of useless, unnecessary items merely collected to clutter your house and/or that they then set an expectation for you, a completely different person and mother, to set up goody bags for your own child's party. I get it. The comparison trap is real — seeing your kid's face when they get a bag full of candy and Moana-themed bubbles can make it feel like, YES, your birthday party budget just expanded to include a goody bag.

But there are no rules here. And judging by the fact that 75 percent of people seem to believe birthday party goody bags are high treason, it's absolutely OK if you don't want to. On the flip side, it's absolutely OK for you to stay up until midnight the eve before your child's third birthday party stuffing goody bags full of blue jellybeans and Goldfish snacks for a Finding Dory-themed party.

Birthday parties are the pinnacle of childhood. My own 4-year-old looks to her birthday months in advance, and if you tell her it's time to celebrate someone's birthday — literally anyone's — she will lose her mind with glee, ready to sing Happy Birthday to You at the top of her lungs, hold her own breath as she watches you blow out the candles, and clap like you just hit a home run. You were born! You're here! And you invited me over to celebrate you!

And if a party favor prolongs that celebration for a kid, well. That just makes me fall head over heels for that little army of goody bags standing watch by the door. That's it, that's the whole thing: and maybe if you took another peek inside, past the confetti (or biodegradable recycled donkey shapes), you’d see that it's NOT ABOUT YOU, CINDY.

More Like This
34 Instagram Captions Perfect For Preschool Graduation Photos
From Captions To Gifts, These Are All The Kindergarten Graduation Ideas You Need
21 Magical Shows & Movies About Unicorns
26 Toddler Lunch Ideas They’ll Actually Be Excited To Eat