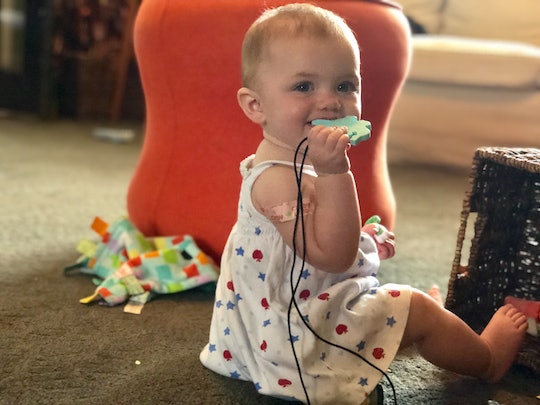 While my family is generally very healthy, we live in a community where that isn’t true of everyone. Our kids’ vaccine schedule has followed fairly closely the the American Academy of Pediatrics recommendations, with a few variations discussed with our doctor whom I trust implicitly. I am generally not an anxious mom, though I certainly have had thoughts of my earlier misgivings about vaccines pop up on shot day. Still, we move ahead in relative illness-free utopia. The things we are vaccinating for, for the most part, are very rare these days. The shots are to keep it that way. Then this week, everything changed in our community, prompting me to try for an early MMR vaccine for my baby.

More Like This
5 Signs Your Baby Is Too Cold
What You Need To Know About Sunscreen For Your Baby
Here's How To Help Babies Gain Weight, According To A Dietician
Here's The Deal With Babies Who Sleep With Their Eyes Half Open

A few measles cases popped up about 30 minutes from us, in places we don’t frequent. I kept an eye on the situation, but did not worry too much. Then this weekend, the health department in my county started noting places of potential exposure in our community. At the same commons as our church. In a thrift store we frequent weekly in our town, and in which my husband had taken our nine month old a few days after a measles patient had been there.

My typical laid-back-mom attitude began to wane, and worry crept in. Not only was I anxious for my baby, but I was anxious for those around me.

For my baby’s nine month well check this week, I came armed with data and a strong opinion that they should give my child the MMR shot that day.

One of my best friends is immunocompromised and cannot receive the MMR vaccine. Two of my neighbors in our small, close-knit community have young sons who have had heart transplants and cannot receive vaccines. As much as I worry about my baby getting measles (and I do worry about that, the mortality rate for kids under 5 with measles is higher than for older kids or adults), I worry more about how my child getting measles could affect those I care about around me. Those that cannot be vaccinated rely on those who can for “herd immunity” to keep these illnesses at bay. Since 2000, an estimated 20.4 million measles deaths have been prevented worldwide due to vaccines, per the CDC. Because of stringent vaccine programs, those who cannot be vaccinated can walk around in a world where they are much, much less likely to be infected by the virus.

So, for my baby’s nine month well check this week, I came armed with data and a strong opinion that they should give my child the MMR shot that day. We had a discussion, and after making sure that I understood that according to a WHO study, there was a chance the vaccine would not take effect, and agreeing to check her blood titers (to see whether she was producing antibodies) and give a booster if needed, the doctor agreed.

Typically early MMR doses are reserved for Americans traveling overseas, but our doctor agreed that the changing measles rates here in our own hometown warranted concern. The nurse came in and administered the shot to my daughter’s tiny little bicep while I snuggled her in my arms, and while no mom likes to see her baby in pain, I felt more relief than anguish. I knew we were doing the best thing we could do to keep her safe, and keep those around us safe as well.

I worry that the rise of pseudoscience and poorly sourced reading material is mongering fear about these little vials that have saved, again, over 20 million lives. I am worried that we live in such a privileged time in the U.S. that we don’t remember what it was like when loved ones died from polio or tetanus or measles, so we underestimate the seriousness of these diseases. Very worried.

So hell yes, if I can give my baby her vaccine a little early and reduce a little bit more risk in the world, I am going to do it.