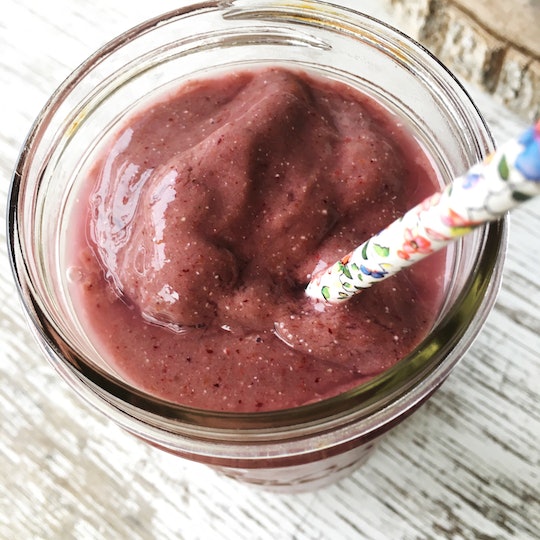 I Ate My Placenta Raw & This Is What It Was Like

After announcing that I planned to encapsulate my placenta and ingest a raw piece of it, my brother-in-law declared that he would never, ever eat spaghetti sauce or drink smoothies at my house again. It was half in jest, for fear that I'd try to sneak him some placenta, but half serious, because honestly, why on earth would someone eat their placenta raw? The Internet is full of anecdotal research on the benefits of consuming your placenta, and some women who have done it rave about their balanced hormones, postpartum healing, and increased milk supply. There have been some small-scale studies done on the benefits of encapsulating your placenta but, as far as I know, no big-name, official research has confirmed that it's actually good for you. (Warning: images ahead.)

During my first pregnancy I didn't know anything about placentas, and that thing got tossed in the trash at the hospital with all other signs of birth. During my second pregnancy though, a friend introduced me to the idea of encapsulating my placenta and eating it that way. She said she avoided postpartum depression by doing so and recovered from birth quickly thanks to the oxytocin, interferon, and prolactin found in the placenta. Not to mention, her milk supply was booming after baby. So, I gave it a go: I ate my placenta in pill form after my second birth and definitely noticed a change. I had more energy, hardly bled postpartum, and managed the transition to two kids with relative ease.

I've heard that some women prepare and eat a piece of their placenta like any other mammal's organs — fried or boiled — but I didn't feel up to that task. Instead, I opted for a smoothie.

Early in my third pregnancy, I started reading more about the placenta. It's truly an amazing organ. The placenta works so hard throughout pregnancy, literally, helping to provide life to my unborn baby. So I decided that it seemed like a waste not to take full advantage of my placenta. Hearing the list of benefits helped me to decide not only to encapsulate my placenta after my third birth, but to eat a piece raw as well.

Ingesting a raw piece of placenta during the first few hours after birth will boost energy, help spur your milk production, and speed up postpartum healing. All of those things are right up my alley, so I put on my brave pants and made arrangements for a friend to prep my placenta for me once I'd delivered it. I've heard that some women prepare and eat a piece of their placenta like any other mammal's organs — fried or boiled — but I didn't feel up to that task. Instead, I opted for a smoothie. I figured a smoothie would mask both the taste and texture and I was absolutely right.

I think anyone could've taken a sip and never guessed that there was placenta inside.

The recipe was one my friend, Corynn, whipped up on my behalf. I wasn't exactly planning to make my way downstairs to the kitchen hours after giving birth, so she said that she'd do it for me. Once my son was born, my husband sent her a text letting her know that we were ready. She made her way to my house and gathered up the goods. I'd prepped all the frozen smoothie ingredients in a plastic baggie beforehand and left her the recipe. All she needed to add was a dash of lime juice, some coconut milk, and a one-inch square cube of my placenta.

Corynn blended up my smoothie and delivered it to me in bed while I snuggled my newborn. I was hesitant to take my first sip. I mean, who wouldn't be? I was worried it would taste funny or worse: disgusting. But between the strong coconut milk flavor and berries to add some texture, I honestly didn't even notice. I swear! I think anyone could've taken a sip and never guessed that there was placenta inside.

That night, after downing my smoothie, I honestly felt on top of the world. I quietly confessed to my midwife that I wished I had a second smoothie to sip on. It was energizing and fulfilling. Honestly, it just seemed right, like I'd come full circle. My placenta had given life to my baby for so long and now its final hurrah was giving me a boost to carry on.

Looking back, I'm so happy I was brave enough to give a placenta smoothie a go. It was different for sure, but it definitely gave me the post-birth boost I was hoping for. With the initial rush of my placenta smoothie followed by my encapsulated placenta (yep, I had both), I feel like I gave myself the best odds of balancing my hormones and thriving throughout my fourth trimester. I know there are plenty who'll have scrunched their noses or made gagging noises after reading this, but really, it was worth it to me. And I'm so glad I did it.