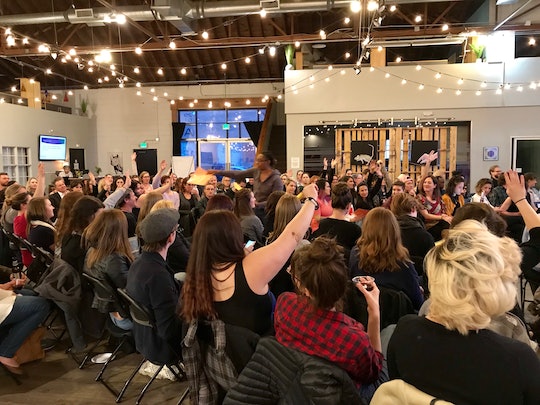 I Took My Partner To An Orgasm Workshop, & It Worked Wonders

Before I had my baby, my husband and I were so good at sex we practically glowed in the dark. Naturally, I assumed we'd go on like that forever, but I never counted on the way giving birth would change everything. I felt like my body had been rewired, and orgasms were awfully elusive. We were mom and dad now, and parenthood, with its childcare disasters and sleepless nights, isn't exactly sexy. Suddenly, we did more bickering than cuddling, and none of my pants fit. (None. Of. Them.) After four amazing years, it seemed like maybe the honeymoon was finally over. We were adults, and it totally sucked. Then I took my husband to an orgasm workshop, and I'm a little ashamed of how much it helped.

More Like This
Postpartum Sex Pain: Why It Hurts & What You Can Do
Your Guide To Swimming Postpartum
Therapist Says: Alone Time For Moms Is A Necessity, Not An Indulgence
30 Quotes for National Brothers' Day

No, an evening of adult sex education didn't solve all our problems, but it did give us a powerful new ritual, and a reason to focus on what was wilting, and why. For moms everywhere, a procedure will follow. It has fewer steps than most Reddit skincare routines, and honestly, I can't recommend it highly enough.

In the scheme of things, an orgasm during sex is a small pleasure — a moment in time. And yet, the loss of this consistent, predictable joy felt huge. Especially in the early postpartum months, it was like I'd lost my way to a green, romantic place, a space I could return to in memory to feel less lonely (because let's face it, motherhood can be terribly lonely), or anxious, or bored. At the end of another laundry-laden, Elmo-infested day, great sex with the person I love can still make me feel luminous, incandescent as I was at 21.

Of course, you don't need to orgasm to have great sex. For us, it was really the loss that hurt. As parents, we'd already given up seeing movies in theaters, getting giddily drunk, and having breakfast in bed. Must we give up more? We hadn't, entirely, but it was definitely hit or miss, and that left us wondering exactly what we were doing wrong, and if the new, dull sheen on our sex life was forever.

Why have we decided that the penis wielders set the clock on arousal, and not us?

So we drove two hours from Colorado Springs to Denver to attend Vibrant's Orgasm Day. After a long day at work, I passed the baby off to a babysitter, and felt instantly lighter as we flew down the freeway. The workshop was backed by Vibrant, a sex toy company whose proceeds go to support Planned Parenthood of the Rocky Mountains. I'd pitched the excursion to my husband as a feminist adventure (with the added enticement that we'd stop at a wine bar on the way home). If nothing else, we'd have a rare romantic date, right?

In a funky warehouse space, about a hundred people — most of them women — had gathered to shop for sex toys and listen to Dr. Laura Deitsch, aka Dr. Shameless, speak about female pleasure. She wore a statement necklace and sparkly eye shadow. Within five minutes, she was brandishing an orchidal replica of the innervated clitoris. (Turns out, the clitoris is five-inches long, and mostly subterranean.) The good doctor talked a lot about the orgasm gap, the vast and horrible difference between men and women's ability to reach orgasm during sex, and somehow made it funny. She cited figures on how and when women orgasm — surprisingly, oral sex isn't as universally effective as the otherwise one-hundred-percent accurate Sex in The City led me to believe — and reminded us that most media does a poor job depicting how female pleasure is achieved. From romantic comedies to pornography, sex is shown from only one point-of-view, and it's actually kind of a boring one.

"The penis can be very instantly and directly stimulated, quickly, and that’s fine," Deitsch drawls, to laughs. "But we’ve grown up thinking that’s the standard, and anything that takes a different amount of time is wrong, bad, inconvenient. I want to know, why have we decided that the penis wielders set the clock on arousal, and not us?"

It's a good question. Hadn't I felt ashamed that it took me so long to orgasm during sex, especially after having my baby? Didn't I wonder if something was wrong with me, or if I was putting my partner off? Then came the moment we'd all been waiting for — the how-to-orgasm-during-intercourse (of all things!) part.

Are you ready? Sitting down? Because here it is. Not the secret, but surely one of them.

Try foreplay, but not the kind you see in movies.

First, just before you have sex, carve out a space to chill out, alone. Imagine a blissfully relaxing place, like a garden or a beach. Use all five senses — don't forget the scent of roses, or the taste of salt on the air — and spend five minutes in your sexy mind palace, breathing deeply, before you have any intimacy. Progressively, shoulders drop, breath evens, and financial problems seem very far away.

Then, says Dr. Shameless, try foreplay, but not the kind you see in movies. (You know, passionate kisses, which are nice, but don't actually get you very far in turns of arousal. In fact, kissing has more to do with relationship-building than with orgasm, says science, and also The New York Times.) Helpfully, Deitsch describes a map of arousal, and it looks like a series of concentric circles, traveling from outer to inner. It's deceptively simple, but also, as I can tell you from weeks of faithful practice, shockingly effective.

Here's how it works, either with a partner or on your own. Start by stimulating the tertiary erogenous zones: scalp, shoulders, back, arms, legs, feet. (At home the first time, mine wore his glasses and glanced at his notes, adorably.) These tertiary zones aren't strongly associated with sex, but you shouldn't skip them. The massage is relaxing, intimate, and all about anticipation.

Next, have your partner move into the secondary zones: around the ears, the sides of the breasts, the armpits, inner wrists, and backs of the knees. Think of it as working from the outside-in, illuminating every nerve as you go. At this point, if you're anything like me, you'll completely forget you have a toddler who wakes you up at seven a.m. every single day, or that you have a writing project to finish, or a pan in the kitchen still sticky with burnt fish. You'll forget because your whole body lights up, even if this weird kind of foreplay is awkward at first. That's when you know it's time to move on to primary erogneous zones — the painfully obvious inner-centers of your body that get so much attention in porn and movies.

Altogether, the relaxing vizualization (during which my partner makes himself scarce, ostensibly to clean up after dinner, but actually to play a video-game) combined with the full-body massage, takes about 15 minutes. It doesn't sound like a lot, but in fact, I realized, 15 minutes is more time than I'd given over to my own pleasure since the baby was born. (Skin-care routine: three minutes; ab routine: 10.) And I also realized, as sex improved, that the loss of orgasm was in part a loss of patience, a shortchanging of care for my mom body/mom mind. Winning back a bit of that time was priceless, even without cumming.

I can't just slide into bed and have mind-blowing sex the way I used to. I need a bridge.

The first time we tried Dr. Shameless's procedure, I tried to skip that relaxation bit. But you can't cheat the process of sinking deeper into your skin, and nor should you want to — unless, of course, you've internalized the idea that your female orgasm takes too long, and is essentially a waste of time. It's not. Female pleasure matters, and I'd argue that it's even more crucial for moms, who risk losing themselves in selflessness each and every day.

Before the baby, when the wall between my real life and my intimate life was thin, I could probably have pulled off an intercourse-orgasm with a few shots of tequila. As a mom, though, that wall has firmed up, bricked with responsibilities, body image issues, fatigue. Now I can't just slide into bed and have mind-blowing sex the way I used to. I need a bridge, and the ritual I learned at the orgasm workshop is a great one. Five minutes on an imagary beach, followed by that concentric massage, makes all the difference. In fact, it's like magic. If you're a mom who can't remember the last time someone lovingly stroked the insides of your knees, I urge you to give this a try tonight.

Trust me, the dishes can wait.