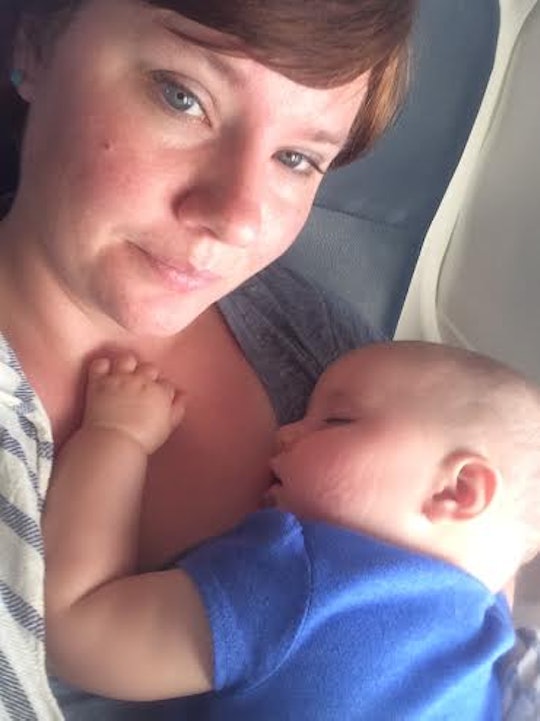 When I do anything in an airport, my comfort level is limited. Sitting in chairs without cushions, brushing your teeth with a dozen other people around, running to the opposite end of the terminal with bags strapped to your back with no time to spare — it all sucks. So it came as no surprise to me that breastfeeding while traveling would have its drawbacks. When it comes to caring for my baby, though, feeding her is pretty much the number one necessity, no matter where I am or what I'm doing. I've done seven flights with my baby on two major trips (those annoying connections!) in her seven months of life so far. And even though breastfeeding in airport is top of the list of traveling discomforts, I had to do what I had to do, and trust me, it wasn't always easy.

As a breastfeeding mom, I've realized both the pros and the cons to feeding my child while out in public. My favorite part of breastfeeding is the sheer availability of milk right then and there, and that obviously came in handy whether on the plane or in the airports waiting on our flights. But when my daughter needed a meal and where we were when she needed it didn't necessarily line up in an ideal situation. Most of the airports I traveled in had nursing mothers' rooms, which I was endlessly thankful for — when I could make it there in time — but the reality of flight times and my-baby-is-hungry-right-now times meant that most of the time I just had to go for it wherever I was. When I did get the chance to use the nursing room, which was usually only before our first flight, I loved it. Both of the airports in Charlotte, North Carolina and London, England, were quiet, private areas without distractions. And I was pleasantly surprised to find both were equipped with a changing area, sink, mirrors, adequate space to sit travel bags, and comfortable chairs to nurse in. The only negative was that both were in obscure parts of the airports — clearly marked but quite far from whatever terminal I was going to have to walk to, which meant getting there and getting back with time to spare for our flight wasn't always as easy as I thought it would be.

And in the case of connecting flights — like when we flew from Charlotte to Los Angeles and back with a stop in Minneapolis on the way there, plus stops in Dallas and Atlanta on the way back — where there is little time to regroup, use the restroom, and grab a bite to eat, I was left to feed my daughter on the way to my next terminal. It was either that, or I just wait until we were on the next plane. Thankfully I never got any nasty comments or awkward stares while breastfeeding in public. There was one slightly awkward moment when a male stranger caught a glimpse of what was going on, but I think it was more embarrassing for him than me since he darted his eyes away quickly and seemed unsure of how to look around the room at that point. What was more of a hassle to me was the lack of comfort while trying to feed my baby, which is sort of obvious since no one is ever truly comfortable in airport waiting areas or in the actual plane's seats.

The bottom line I kept reminding myself of was that none of that really mattered when it came down to needing to do what I needed to do for my child.

The one thing that helped me in the discomfort of breastfeeding in public, however, was having my partner with me. When I needed, he could help prop up my arm as I breastfed or pull my shirt down for me after the 27 time my daughter exposed more skin than I wanted. I would seriously not want to imagine traveling alone, and I know how lucky I am that he was there with me every step of the way to help.

While traveling, I didn't even try to use a nursing cover. I abandoned those long ago. Trying to use one with a wiggly and super active 6 month old? Never going to happen for me. My daughter pulls off or pulls down anything that's over her head or covering her, so there were definitely times I had to abandon my tendency to keep covered up and just let it all hang out. I'm full-busted, too, so any efforts of being discreet pretty much got thrown out the window, unless you count putting the stroller in front of the chair I was sitting on at the airport gate. It certainly stretched me out of my comfort zone, but the bottom line I kept reminding myself of was that none of that really mattered when it came down to needing to do what I needed to do for my child.

Aside from the inconvenience of breastfeeding in airports and on planes, it was also downright exhausting. I tried to keep my baby on a regular feeding schedule and ready to eat when we were taking off or landing, but there were inevitably occasions when she just wasn't hungry yet. And stressing over her bothering other travelers only made me more tired.

Nursing on the plane felt more private than in the airport, except for the flights on planes with an aisle between a row of three seats. The passenger beside us on flight from Dallas to Atlanta was assigned the window seat, and I would have offered him the aisle, but having the aisle side was incredibly helpful when it came time to change her diaper. I was grateful that the man was a father who had traveled a lot with his kids when they were little, because when I mentioned to him that I'd be nursing, he was totally OK with whatever I had to do — even prying my daughter's hands from his jacket since she likes to "explore" with them while she's eating.

No matter where we were, or where we were headed, I constantly proud to feed my child and, despite being uncomfortable and tired at times, I never wished that I would have brought pumped milk to feed her instead.

Aside from the inconvenience of breastfeeding in airports and on planes, it was also downright exhausting. I tried to keep my baby on a regular feeding schedule and ready to eat when we were taking off or landing, but there were inevitably occasions when she just wasn't hungry yet. And stressing over her bothering other travelers only made me more tired. As if feeling drained from normal breastfeeding isn't enough, adding a crazy travel schedule to the mix definitely topped my fatigue levels.

I mostly found that people near us in the plane or airport were generally understanding and even helpful when I needed to breastfeed, and it's something that I'm still incredibly grateful for. No matter where we were, or where we were headed, I constantly proud to feed my child and, despite being uncomfortable and tired at times, I never wished that I would have brought pumped milk to feed her instead. In the end, breastfeeding in public while traveling might not have been my favorite part of our whole trip, but it wasn't as terrible as I had imagined it to be.