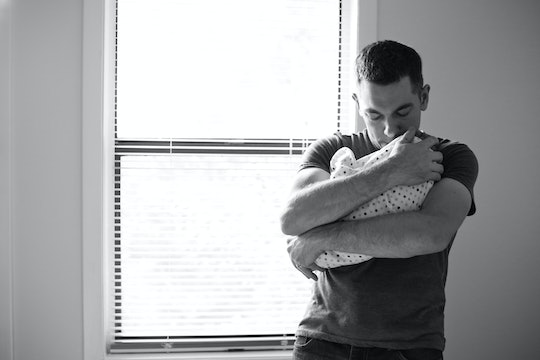 When It Comes To My Breastfeeding Success, I Have My Partner To Thank

These days, I don't give breastfeeding a second thought. It's as natural to me as giving my baby a kiss or changing a diaper. (But definitely more pleasant than changing a diaper.) Yet I can so easily recall how difficult it was for me in the beginning. Which is not to say I had any insurmountable struggles; I was lucky. I had plenty of milk. My baby latched. Even though things went relatively smoothly, caring for an infant — especially breastfeeding — turned my life upside-down. But I wouldn't have been half as successful if it wasn't for my partner's breastfeeding support.

After the birth of our first son (and then our daughter a few years later), I was responsible for a human's sustenance and nurturing. My partner helped as much as he could with other childcare duties, but the feeding was all on me. But it isn't just the feeding, it's the sudden awareness you have about your baby when you're establishing breastfeeding as a routine and breastfeeding on demand. No matter how much my partner took up caring for the house, or changing our son, or rocking and playing with him, I was the one who knew when he needed to eat. I'm the one who sat in my rocker and nursed him for all of those hours. It's an amazing experience, but it can be difficult in so many ways. And I'm not sure I could have done half as well without the support of my partner.

First and foremost, my partner believed in all of the benefits of breastfeeding and understood how important it was to me. I knew that barring any unforeseen difficulties, I was committed to exclusively breastfeeding. He never helpfully (or, more likely, unhelpfully) suggested I just "top our baby off with a bottle." He read up on breastfeeding before the baby was born. He attended a breastfeeding class with me at the birth center where we delivered. I knew he was behind my decision to breastfeed 100 percent.

I knew he'd fight for my right to breastfeed my baby wherever I was. And even though I don't need him to fight my battles for me, or speak for me, knowing that I had that kind of support from him really helped me overcome any nerves I had in the beginning.

More than his supporting me in my choice to breastfeed, he also put me at ease when I nursed in public. He never seemed uncomfortable that people might see my breasts, when before he was the only one. If we were at a restaurant and the waiter came to take our order while my baby was breastfeeding, he never missed a beat, or worried what people would think. He helped me feel relaxed about it. I didn't doubt that if anyone complained, or asked me to be more discreet, that he wouldn't staunchly put that person in their place. I knew he'd fight for my right to breastfeed my baby wherever I was. And even though I don't need him to fight my battles for me, or speak for me, knowing that I had that kind of support from him really helped me overcome any nerves I had in the beginning.

There are also a lot of little things he did, like making sure, no matter the hour, that I always had water. He'd offer me a snack during my marathon nursing sessions. He'd hand me the remote and watch TV with me when the baby fell asleep on me while at the breast.

But one of the most important things he did as my breastfeeding ally was to sort of take the backseat in parenting. This can't be overlooked, because I know this was difficult for him. My first child especially really only wanted me most of the time. We had a strong bond, one that had been nurtured at the breast. And of course, my husband didn't have that opportunity. Even when my son was older, eating solid foods, and then walking and talking, he still preferred me much of the time. I know it was frustrating when our baby would cry and the only thing that soothed him was me, but my partner understood and respected our bond. It took time, but he carved out his own bond with our son. Now my partner is the one our son goes to for fun, when has questions about how the world works, or when he wants to play a board game. All of that took years to establish, and I'm endlessly thankful that my partner gave us all the space to let that relationship foster on its own time.

My partner has accepted my limits and my comfort-level without question. I think this speaks to a deeper respect he has for women in general, and it's just one thing I love about him.

My partner also understood that breastfeeding sometimes makes me touched out. (Which any mom knows is a very, very real feeling.) He understood when I wanted to snuggle less and when I didn't want him to touch my breasts during sex. He accepted that my breasts had a new job. He never demanded equal time with my breasts. I've heard friends with kids complain that their partners emphasize their breasts' sexual functions and didn't hide their annoyance when they're suddenly off-limits. I've never once felt an ounce of shame in the fact that I am so utilitarian about my breasts now. My partner has accepted my limits and my comfort-level without question. I think this speaks to a deeper respect he has for women in general, and it's just one thing I love about him.

More than just supporting me physically, my partner has been with me step-for-step on our parenting journey. He listens to what I need. He looks for ways to be involved and to let me know that I'm doing a good job. His unwavering faith and belief in me has ushered me through some of my lowest moments.

And when my child didn't wean after a year, or two, or three, my partner supported me in that decision. I was following my son's lead, and my partner saw the benefits, both physically and emotionally, for my son. My partner never put any pressure on me to wean. He never said it was time for my breasts to be my own again. (In fact, if he had, that would have been a huge problem.) Even when I was pregnant with my second child and nursing became painful, he helped me talk through the decision to continue nursing. He took over much of the nighttime parenting when we decided to night-wean our son — a decision we made together, even though I was anxious about trying it. Some people would be shocked at the sight of a newborn and a preschooler nursing at the same time. But my partner just accepted it and appreciated how sweet it was and how it helped our children bond with each other.

My partner is my ally in everything, but never more so than when we had a child together. I am lucky to have such a supportive family who stands behind my parenting decisions. But more than just supporting me physically, my partner has been with me step-for-step on our parenting journey. He listens to what I need. He looks for ways to be involved and to let me know that I'm doing a good job. His unwavering faith and belief in me has ushered me through some of my lowest moments. Being a new mom is hard. I can't imagine how difficult it would be without someone like my partner in my corner. I don't take it for granted. Because my partner made breastfeeding more than doable, he made it easier and he made me feel important for taking on the monumental task of feeding our baby.